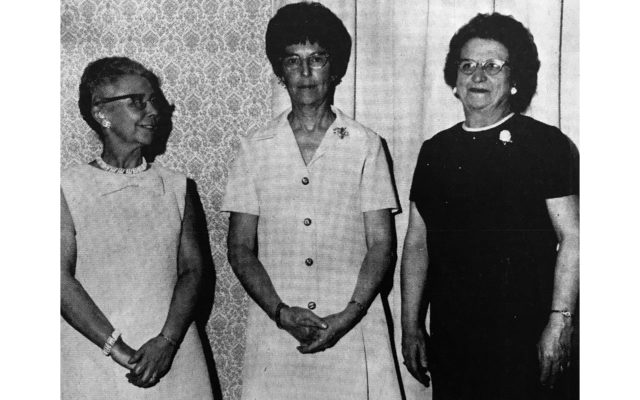 Contributed • June 6, 2019
115 Years Ago - June 3, 1904 Maine building at fair — Albert Astle, who had charge of the erection of the Maine building at the St. Louis fair, returned to his home in this town Saturday evening.

New business in town — On June 13, the Bar Harbor Sea Food Co. will open a modern Sanitary Fish Market in the Thibodeau block, corner of Main Street and Broadway, in the store now occupied by W.J. Thibodeau. The moving spirit in this business is Robt. A. Davis of Bar Harbor, who about 20 years ago lived in Houlton for a time, representing the Manhattan Life Insurance Co., and has many friends here who will congratulate him upon his decision to come to Houlton and open a fish market.

More fish — Last week there was received by Messrs. A. A. Hutchinson and H. J. Donald, from the fish hatchery at Auburn, 12,000 fingerling salmon which were liberated in Drews Lake.

Changing owners — Taggett and Gartley, the largest men’s clothing store in Northern Maine with a record of 42 years in business in the same location, changed ownership Tuesday when its purchase by Phil Churchill, an employee of the store for the past 12 years, was announced by the retiring partners.

Accepting a position — Miss Gladys Tozier, who has been employed in Presque Isle, has accepted a position at the Houlton Savings Bank.

Sale was great— The Moonlight Madness promotion last Thursday in the downtown shopping area and at the Shopping Center on the North Road has been termed as one of the most successful yet sponsored by the Retail Trade Board of the Chamber of Commerce. A partial list of special prizes that were awarded during the evening follows: Bither’s, $25 dress to Brenda Bailey of Monticello; Woolworth’s, electric cord organs to Karen Rochford of Houlton, Ruth MacDonald of Houlton and Martha Smart of Houlton, chaise lounge to Bernice Nickerson of Houlton, and three pair of fiber glass drapes to Joyce Swimm of Monticello.

Newspapers on Microfilm— Leland ). Ludwig Jr., chairman of the board of trustees of the Cary Library, has announced that the library now has a collection of early local newspapers on microfilm. The Aaron A. Putnam Memorial Fund made possible the microfilming of the Aroostook Times from the first issue in 1859 up to the year 1910.

Only one member of Maine’s congressional delegation had come out in favor of impeaching President Donald Trump ahead of House Speaker Nancy Pelosi’s Tuesday announcement that the Democratic-led House of Representatives would begin an impeachment inquiry.
Pets END_OF_DOCUMENT_TOKEN_TO_BE_REPLACED