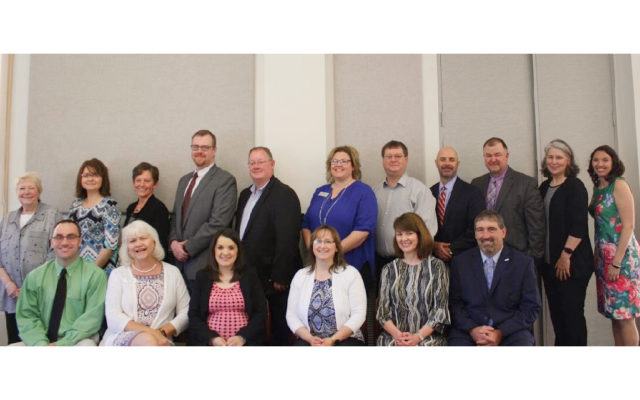 Contributed • June 13, 2019
United Way of Aroostook hosted its annual meeting on June 6 with a breakfast held at the University of Maine at Presque Isle’s Campus Center.

PRESQUE ISLE, Maine — United Way of Aroostook hosted its annual meeting on June 6 with a breakfast held at the University of Maine at Presque Isle’s Campus Center.

More than 140 guests attended to celebrate the success of the year.  The meeting served as an opportunity to highlight donors, businesses and organizations which support the agency’s work. United Way officials also announced the 17 agencies it will help to fund along with two special programs it will support with grants.

Board President Wanda Guiggey said, “We need the support of our donors, partners, sponsors and volunteers to ensure that we are moving our community forward and making Aroostook County an even better place to live and work.”

She shared the recent successes of several United Way initiatives, including the Dolly Parton Imagination Library, Summer Slide Program, Book Nook, Aroostook CA$H Coalition, two telethons (Heating Homes with Helping Hands and Operation 24) and Stuff the Bus Aroostook, highlighting that all of these programs are moving the needle in the right direction by promoting self-sufficiency.

The meeting also highlighted volunteerism and the impact it has on the community.  In the last 12 months, United Way has logged over 3,000 hours of volunteer time. The employees of Katahdin Trust were named the 2018 Volunteers of the Year for their efforts in a list of over a dozen events. The group of hardworking volunteers plan to serve in three communities for the Aroostook County Day of Service, scheduled Tuesday, June 18.

Campaign cabinet member Denise Plourde and campaign co-chairperson, Janet Doak, presented a special award to the employees at SAD 1 for their growing workplace campaign.  Their organization has continued to increase employee giving by and partnering with UWA on many shared projects.

Nonprofit agencies applied for funding back in March and the Fund Distribution Task Force, made up of community volunteers, determined which agencies would receive funding and at what level.  At this meeting, Tony Lahey, community funding chair, presented the new agencies with their funding packages.

Locke wrapped up the meeting by thanking the community for its support as United Way evolves to create the greatest impact.  She also thanked the donors, businesses, and organizations for helping to increase the reach of United Way of Aroostook.

Bonnie Foster of Katahdin Trust selected a name from the attendees to win a basket of school supplies to be delivered to the winner’s school of choice.  Kathie Beaulieau of Limestone won the basket, and she donated the supplies to the Limestone District School.

At the Houlton Humane Society, we take adopting the cats and dogs in our charge very seriously.
Campaign Corner END_OF_DOCUMENT_TOKEN_TO_BE_REPLACED