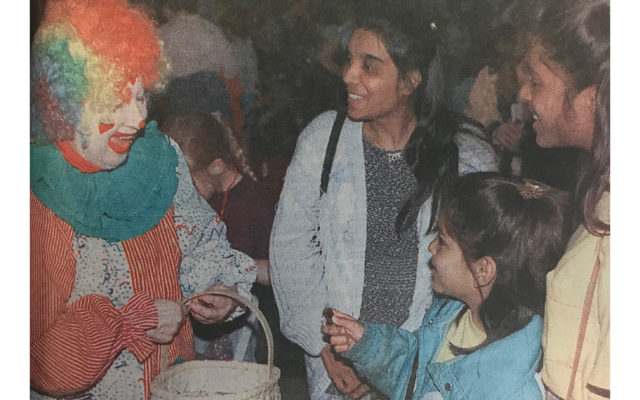 New coach — Arthur Putnam of this town has been elected manager of the Bowdoin baseball team for the season of 1905.

The doctor is in— Dr. Sullivan, the eminent eye and ear surgeon and specialist, late first assistant surgeon to the Maine Eye and Ear Infirmary of Portland for seven years, will be in Houlton at the Snell House from Monday, June 13, until Friday, June 17.

Prize winners — The prize winners at the Moonlite dance last week were Mr. Patterson, manager of the Direct Importing Co., and his wife, who were acclaimed the best waltzers on the floor.

Drawing in the people — The Gladys Clark Co., which is playing an engagement at the Temple Theatre, used a novel advertising scheme on the street in the shape of an electrically operated piano which toured the principal streets in an auto, playing a fine program of popular music.

Great start — It was Flag Day and the school children of the town decided some weeks ago that the best way to honor the flag was to stage an outstanding demonstration of bond sales. With a rousing bond sale program more than $33,000 in five school buildings, pupils of Houlton schools did their bit yesterday to get the Fifth War Loan drive off to a good start as every pupil took part in the parade which featured the days program and in the bond sale rally which followed.

Accepted position — Miss Mary Jane Gorham was one of a group of graduates of Becker Junior College, Worcester, Mass., to be accepted for work in the Navy Department in Washington, D. C. as civil personnel. The group was selected by Miss Louise Friot, Washington recruitment representative. Miss Gorham is the daughter of Mr. and Mrs. Frank Gorham.

Parade of the shoe boxes— Students of Grade 6 at the Littleton School created parade floats out of shoe boxes as a special year-end art project. Each parade was mounted on a toy vehicle, so that it could actually be paraded in the gymnasium. Winners of the art project, directed by Mrs. Serita Dow, were Judith Ingraham with her ‘Miss USA’, Mary Adair with ‘Rapunzel’ and Ann Boutilier with ‘Queen of the Roses.’

Open House— Some 150 people attended the open house Saturday at My Brother’s Place, owned and operated by Garland F. and Emma McIntosh, located three miles north of the Houlton exit of Interstate 95 on Route 1. Some 50 initial sites will be available with underground electrical and water hook-ips, and a sanitary disposal station.

Only one member of Maine’s congressional delegation had come out in favor of impeaching President Donald Trump ahead of House Speaker Nancy Pelosi’s Tuesday announcement that the Democratic-led House of Representatives would begin an impeachment inquiry.
Pets END_OF_DOCUMENT_TOKEN_TO_BE_REPLACED

We think a cat can make for the best pet in the world. To truly love a cat, you must learn to accept them for what they are -- unpredictable and quirky, which is something unique and unlike any other pet.
Campaign Corner END_OF_DOCUMENT_TOKEN_TO_BE_REPLACED