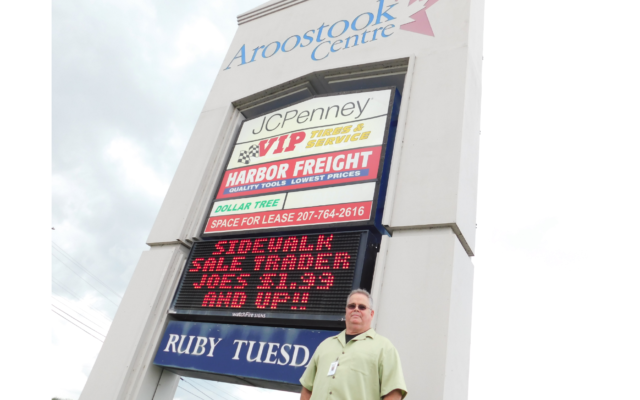 Nina Mahaleris • July 7, 2019
When Bruce Brigman moved back to The County last year, he didn’t plan on doing much besides working two days a week and fishing the other five.

But by July, he was the new manager for the Aroostook Centre Mall and already had plans to reinvent the space. Brigman is replacing Patti Crooks, who recently retired after having served as the manager since 1995.

Brigman is a County native who grew up in Presque Isle but has spent the last three decades in New Hampshire. He retired from the Army in 1983, when he went on to pursue a career in manufacturing management.

But after he was laid off from two companies as they faced liquidation problems of their own, Brigman decided it was time to move back north. He said his plan all along was to end up back in Aroostook County.

“Within a month, I was laid off, then bought a place in Caribou,” he said.

Over the last several decades, the mall has struggled to maintain itself in light of financial burdens. In 2017, the mall went on the auction block after Sitt Asset Management, a New York-based company, reportedly failed to meet their mortgage payments.

A Texan business called the Woodmont Company later purchased the mall before the Kohan Retail Investment Group, based out of New York, bought the property for $4.65 million earlier this year, according to the Bangor Daily News.

The Woodmont Company hired Brigman to work as a professional security consultant before the property was sold. After the Kohan Investment Retail Group took over in March, they decided to keep Brigman on as the security manager.

By last week, Brigman was promoted to oversee the entire mall. In addition to other roles under his new title, he still supervises mall security. As part of the plan to revitalize the mall, Brigman said he wants to encourage people to stop by and give their opinions on future improvements.

On Tuesday, Brigman posted a request on the Aroostook Centre Mall Facebook page asking people in the area what stores they’d like to see brought to the mall. In less than two days, the post received over 600 comments. The majority of comments included suggestions for retail anchor stores such as TJ Maxx, Old Navy, Target and many other popular chains which the mall is currently lacking.

Brigman said getting community feedback is part of the overall plan to reinvent the space, but what they really need is to bring in more people. Bringing new stores to the mall isn’t easy, because the mall has to market itself as a place to shop, which will attract prospective business owners to open their own stores.

“We’re trying to get people in,” he said.

More foot traffic will attract both small and large businesses, he said, which will encourage them to rent retail spaces. But first, the prospective buyers need to see that the mall has enough traffic to make it worth their investment.

Right now, his plan is to reach out to local businesses who might be interested in leasing out retail spaces inside the mall, which will help encourage larger stores to come, too. In the past, smaller companies and local businesses were driven away from renting spaces at the mall due to the cost, Brigman said.

He said he wants to offer these smaller businesses opportunities that will make it more feasible to rent in the mall. The mall contains space for another 16 stores, spread out over 200,000 square feet.

“We can do a lot better than we’ve been doing,” Brigman said. “At this point, anything goes.”

Mike Kohan, president of the Kohan Retail Investment Group, was not immediately available for comment.

For all it does to refresh us, burn energy and keep us sharp, we all need playtime, dogs and cats included. Sharing playtime with pets has the added benefit of strengthening the bond between us, so we better understand one another.
Campaign Corner END_OF_DOCUMENT_TOKEN_TO_BE_REPLACED