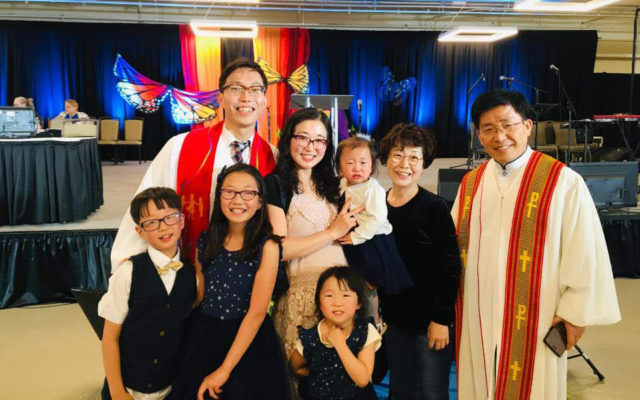 Contributed • July 16, 2019
Pastor Victor Han was ordained as a Full Elder in the United Methodist Church on June 14 at the New England Annual Conference in Manchester, New Hampshire.

HOULTON, Maine — Pastor Victor Han was ordained as a Full Elder in the United Methodist Church on June 14 at the New England Annual Conference in Manchester, New Hampshire.

As an adolescent and in college, Han did much spiritual wandering. He had doubts about his faith, but fortunately for him, his parents were very patient and loving with him and encouraged him to fully devote himself to the work of God.

Pastor Han had several defining moments in his faith walk. In 2000, while he was serving in the military in the United Nations Peace Keeping Force in East Timor, he was serving in this very remote and underdeveloped country when he became very ill with “Dengue Fever.” There was no proper medical treatment because of the isolation. He became delirious from a high fever.

He knew he was walking through the valley of death. He prayed on his camp bed and repented from his sins. The prayer he prayed was: “God, if you save my life, I will humbly serve you with all my heart for life.”

The next morning when he awoke the fever had left him and the rash on his body had completely disappeared. He went out and leapt like a calf released from the stall. After this experience, Pastor Han read the Bible from cover to cover to know God better and encountered Jesus Christ, who became his Savior and Lord.

After his military service, Pastor Han went home to his hometown church. He became actively involved in various ministries including Sunday school, youth work, young adult group and choir. He wanted to serve the Lord, but began pursuing other paths including a lawyer, a professor, working with the United Nations and a pastor. He had two mentors; an old friend of his father’s who were a pastor and a professor; and another college professor. They both recommended that he attend Seminary.

In 2006, he was engaged to Joyce, who was working on her master’s degree. He left Joyce in Korea and came to the United States to attend Gordon-Conwell Seminary in South Hamilton, Massachusetts near Boston. There he received a master of divinity degree, and a master of theology in the Old Testament. He finished in 2011.

In 2014, Pastor Han was assigned full-time to the Houlton and Hodgdon churches. He was still studying to fulfill the requirements to become a Full Elder. He had to travel to Boston five times a year to the Provisional Leadership Academy. In October of 2018 he passed his interview to officially become a Full Elder. He became ordained at the Annual Conference in June of 2019.

Pastor Han stated as he was being ordained the passage from John 21: 18 came to mind: “I tell you the truth, when you were younger you dressed yourself and went where you wanted; but when you are old you will stretch out your hands, and someone else will dress you and lead you where you do not want to go.”

He was overwhelmed with the joy of his accomplishments, and at the same time overcome with the responsibility that this position will be in his life. Pastor VHan’s parents were in the United States for his ordination. His father was able to stand up for him during the ordination ceremony.

Maine is more than eight months into Medicaid expansion under the federal Affordable Care Act and trends around who is enrolling and where they live are starting to emerge, bucking some expectations and pointing out access challenges.
Pets END_OF_DOCUMENT_TOKEN_TO_BE_REPLACED