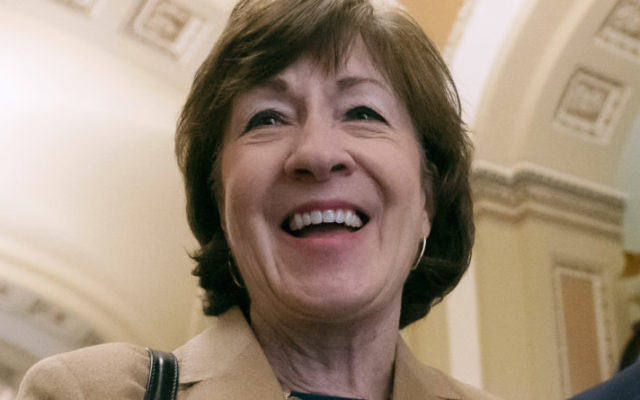 Michael Shepherd • July 17, 2019
U.S. Sen. Susan Collins has raised more money for her nationally targeted 2020 re-election campaign than she did in all but one of her previous four races, but a Democratic challenger with national backing raised more than $1 million in 10 days.

AUGUSTA, Maine — U.S. Sen. Susan Collins has raised more money for her nationally targeted 2020 re-election campaign than she did in all but one of her previous four races, but a Democratic challenger with national backing raised more than $1 million in 10 days.

The Republican incumbent raised nearly $6.5 million as of June’s end, surpassing her total haul in any of her Senate campaigns so far except her race in the Democratic wave year of 2008, when she easily defended her seatagainst a challenge from Tom Allen, then a sitting Democratic congressman.

The 2020 race is expected to shatter Maine political spending records as national Democrats have made Collins a target after her October vote to confirm U.S. Supreme Court Justice Brett Kavanaugh. Two well-known Democratic challengers — Maine House Speaker Sara Gideon of Freeport and lobbyist Betsy Sweet of Hallowell — are running for the nomination to face Collins.

Gideon declared her run in June, nearly two weeks after Sweet and six days before a fundraising deadline for a period running from April 1 to June 30. The House speaker rode a national groundswell to raise nearly $1.1 million over that period to Sweet’s $81,000.

Filings in all Maine congressional races were due to the Federal Election Commission by Monday’s end, including the swing-seat 2nd Congressional District. U.S. Rep. Jared Golden, a Democrat, raised $729,000 by June’s end, which was roughly three-fifths of what Republican Bruce Poliquin had at this point in a 2018 re-election campaign that he lost to Golden.

Collins raised $2 million alone in 2019’s second quarter, the most she has ever raised in a three-month period, with only $33,000 from donors who gave $200 or less. Of the rest of her money, $98,000 came from Maine donors. Overall, Collins has gotten 24 percent of her money from political committees.

Those who donated to Collins in the latest fundraising period included casino billionaire Sheldon Adelson, who gave $123 million to conservative causes in 2018, according to the Center for Responsive Politics. Collins got $353,000 from other committees set up to benefit her and other Republicans running for re-election, including U.S. Sen. Lindsey Graham, R-South Carolina.

Sweet, who finished third in the Democratic gubernatorial primary last year, was far behind at $81,000 over roughly 25 days. All of her money came from individuals and 44 percent came from people who gave $200 or less.

Tracey filed to run on Monday. Bunker and independent Danielle VanHelsing of Sangerville reported no fundraising. An initial filing for Collins’ longshot primary challenger, Derek Levasseur of Fairfield, showed his campaign in debt with just more than $6,900 in fundraising.

Golden got less than a fifth of his money from political committees and $33,000 from other committees benefiting his re-election. He has no 2020 opponent, though that is likely to change soon. Former state Sen. Eric Brakey of Auburn, the Republican U.S. Senate nominee in 2018, is considering a run, and Poliquin hasn’t ruled out trying to reclaim the seat.

U.S. Rep. Chellie Pingree, a Democrat from the 1st Congressional District, raised $87,000 by June’s end in a safe Democratic district where she has no 2020 challenger yet. She returned $6,500 in contributions to the parent company of Central Maine Power and put $2,000 toward campaign debts incurred by Lucas St. Clair in his 2018 primary loss to Golden in the 2nd District.

Two political newcomers are looking to fill a seat in the Maine House of Representatives for House District 144 after the current representative dropped out of the race.
Pets END_OF_DOCUMENT_TOKEN_TO_BE_REPLACED