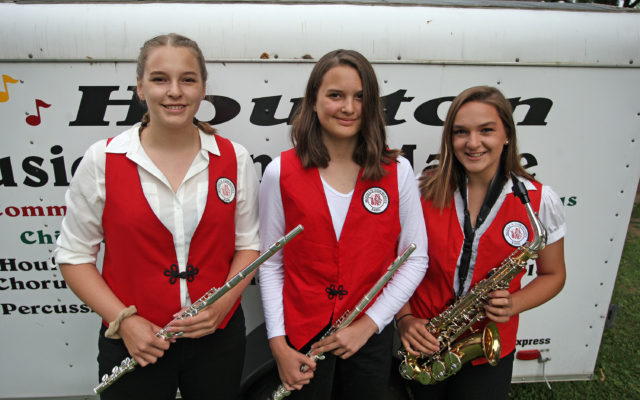 Joseph Cyr • July 18, 2019
Joining a well established community band can be intimidating for even the most experienced player.

HOULTON, Maine — Joining a well established community band can be intimidating for even the most experienced player.

But that reservation has not stopped three sisters from Linneus from spending their summers cranking out cool tunes as members of McGill’s Community Band. Tabetha, Autumn and Alexis Ganzel, the children of Mark and Deborah Ganzel, are enjoying their first summer playing together with the local community band.

“They fit right in,” said Kevin Mania, general manager for the band. “(They are) always ready to play and contribute to the group.”

Alexis, who will be an eighth-grader at Hodgdon Middle High School this fall, is in her first year with McGills, while Autumn, an incoming senior at Hodgdon, is enjoying her fifth summer with the band. Tabetha, a third-year student at the University of Maine in Orono, is a seasoned veteran with eight years under her belt.

Tabetha, 20, first picked up the flute in the fifth grade when she was 10 years old. She chose this particular instrument for the family connection. “I chose the flute because my mother used to play flute,” she said. “Plus, I love the sound and the look of the instrument.”

Her little sister Alexis, 13, followed a similar path. “I picked up my first flute when I was very little,” she said. “It was my mom’s and I was so fascinated with all of the keys.”

Seventeen-year-old Autumn went her own route and gravitated toward the saxophone. She began playing in the fifth grade, also at the age of 10.

“Our school brought us over to the high school so the students could showcase the instruments our band had to offer,” she recalled. “When a student played the alto saxophone for us, I loved how versatile the instrument was. I loved how easily it could portray emotion.”

Tabetha said when she first joined McGills eight summers ago, she was a little intimidated by the age difference between herself and the more experienced members of the band.

Tabetha said when she was younger she would get nervous before each show, but now, after eight seasons, she is used to it.

“I don’t get very nervous anymore and look forward to each performance,” she said.

When Autumn first joined, the nerves got the better of her.

“I will admit, I was terrified when I first joined,” she said. “The only other member I knew was my sister Tabetha. But this intimidation quickly faded away when a fellow saxophone member, Arlene Bean, along with others, welcomed me into the group and helped me through all the new music.

“During my first few years I would get extremely nervous before concerts,” Autumn added. “But, the longer I’ve been in the band I get excited for concerts. I love to meet with the other members and create music for the community to enjoy.”

Tabetha, who is also currently involved with the University of Maine Concert band in Orono, said her time playing with McGill’s has helped her become a more well-rounded musician.

“McGill’s Band has taught me many things that I use in concert band at the university,” she said. “I can definitely say that McGill’s Community Band has helped me to become the flute player I am today.”

The trio often talk at home about the different songs they are to perform for that week’s concert. “I love being able to get ready with them and attend the concerts together,” Tabetha said. “It’s nice having someone to talk to about band things.”

Playing in McGill’s is vastly different from performing as a member of the Hodgdon Middle High School Band, Autumn said. “There are so many skilled and talented members in McGill’s who have infectious attitudes because they all love being a part of the band,” she said. “In McGill’s we play a large variety of music allowing us to play many pieces that challenge us each week. At school our band focuses on a few select songs for each concert and we work to make sure each member can understand the fundamentals of the music.”

All three young women said the adults in the band have proven to be extremely helpful to the younger members. “The adults are very (helpful) because they are also so nice and they play very well,” Alexis said.

Autumn added going to the park and seeing her big sister playing in McGills while still in high school gave her the confidence to try out for the band once she was old enough.

“Each week we would go out to the park and listen to her play,” Autumn recalled. “I loved going and seeing the community coming to listen to the band. As a child I looked up to the members of McGill’s. When Tabetha mentioned joining the band and that I had a chance to wear a red vest, I couldn’t pass up the offer.”

Playing together has not created any sort of sibling rivalry, the sisters said. “I love it, it helps me feel more connected to them,” Autumn explained. “When first joining, having my older sister in the band was great with calming nerves. Now I get to do the same for my little sister who has joined this year.”

“Playing with my sisters is amazing,” Alexis added. “I get to have help on songs and they make me feel more comfortable. Plus I get free rides.”

“Both of my sisters joined so my mom thought that it would be a good idea for me to join and I was okay with it,” Alexis said. “I grew up going to the McGill’s concerts. Sometimes (she gets nervous) because I don’t really know some of the music that well.”

For Autumn the song “Pop and Rock Legends: The Mamas and Papas, Chicago, and Neil Diamond” medley is her favorite tune to perform. Alexis, however prefers the more modern music, such as “The Best of Journey” medley.

Tabetha’s favorite song to perform varies from year to year. Originally, she was a big fan of the “Pirates of the Caribbean” theme music, and would spend hours practicing the song until she got her part just right. This year, her favorite piece is “Come Fly With Me,” by Frank Sinatra. “I love the calm way that song flows,” she said.

“It’s always great to see family members involved in music,” added Mike Hutchinson, band director. “When I was a student, I played in our community band with both of my parents and my brother and have a lot of fond memories from that experience.”

All three sisters like to practice the songs in that particular week’s set list so they are prepared come Thursday evening. McGill’s Community Band performs at the amphitheatre in Monument Park every Thursday evening at 7 p.m. through Aug. 15.

Many of you have been following Luke's story on our Facebook page. Luke came to the Ark last July with his sister Lydia at 8 weeks old. Both Luke and Lydia were in really bad shape with untreated upper respiratory infection.
Campaign Corner END_OF_DOCUMENT_TOKEN_TO_BE_REPLACED