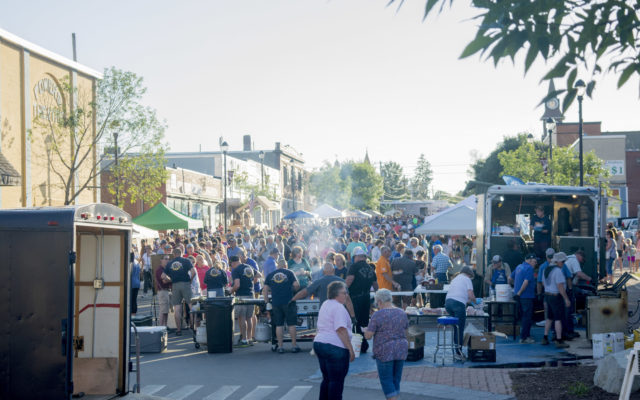 Chris Bouchard • July 19, 2019
Hundreds came together for Caribou’s Thursdays on Sweden street festival, a three-hour event taking place every other Thursday during the summer.

CARIBOU, Maine — Hundreds came together for Caribou’s Thursdays on Sweden street festival, a three-hour event taking place every other Thursday during the summer.

A myriad of vendors also lined the street, and among them Caribou City Clerk Jayne Farrin and Deputy Treasurer Holli Doody were selling baked goods to raise money for fellow employee Kalen Hill, who recently was diagnosed with a rare form of liver cancer and is in need of a liver transplant.

Farrin said Hill came to work for the city in 2010 as a deputy city clerk, and that she has held the job ever since.

“We have good health insurance through the city,” Farrin said, “but Kalen needs to make trips to Boston. She will be Angel Flighted, but she has expenses and hotel costs. She’s waited to get help through her disability, but it’s been over a month and she hasn’t been paid yet, so we’re trying to help Kalen pay her bills.”

The City Clerk said the idea came from Doody, who worked with Deputy Tax Collector Holly Nadeau to organize the fundraiser for Hill.

From there, Farrin said all of Hill’s coworkers have come together to help in some way, by making baked goods, donating items for raffle, or by purchasing an emerald green ribbon to show their support for battling liver cancer.

Before coming out to Thursdays, Farrin said they have raised $1,500 in less than a month, and Farrin said a couple anonymous donors have since made very generous contributions.

Any residents who would like to help Hill can send donations to the Caribou City Office at 25 High St., or stop by in person and drop it off at the City Clerk’s office.

“We love Kalen,” said Farrin, “and Caribou cares about Kalen.”

Members of the Caribou-based Aroostook Roller Derby team “BiohazARDs” were also out in full force promoting their upcoming events and letting residents know how they can sign up to join the team.

Derby coach Jay Olson said the team plans on starting its annual Burger Boy car hop on Aug. 7, and that while some of the details are still being worked out, he hopes the decision to change the event from Mondays to Wednesdays will bring out more customers.

The Derby’s car hops typically raise money for a local cause, and this year Olson said proceeds will go directly to supporting Burger Boy.

The team also has an upcoming game on Aug. 31 at the Caribou Recreation Center, and Olson said doors will open at 5 p.m. and the competition will start at 6 p.m.. 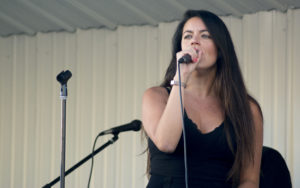 “We’re also trying to promote ourselves and to get more people to know we’re still out here,” Olson said. “We’ve been here for six years and we’re more than willing to train anyone who wants to join. We have a few bouts left in our season but I can still work with any new recruits.”

Currently the team has a few new recruits in training and 15 who are currently participating in bouts.

Janet Bosse, aka “Sprockett,” said she joined after looking for a form of stress relief.

“Joining derby was awesome because it was a group of women looking for the same thing I was,” she said, “and we really bonded. They’re all my sisters now.”

Sprockett has been a member of derby for three years, and encouraged anyone on the fence about joining to see what the team has to offer.

“We’ll teach you how to skate,” she said. “Don’t be afraid of that, and don’t be afraid to fall because we all get right back up and the pads help a lot.”

Maine is more than eight months into Medicaid expansion under the federal Affordable Care Act and trends around who is enrolling and where they live are starting to emerge, bucking some expectations and pointing out access challenges.
Pets END_OF_DOCUMENT_TOKEN_TO_BE_REPLACED