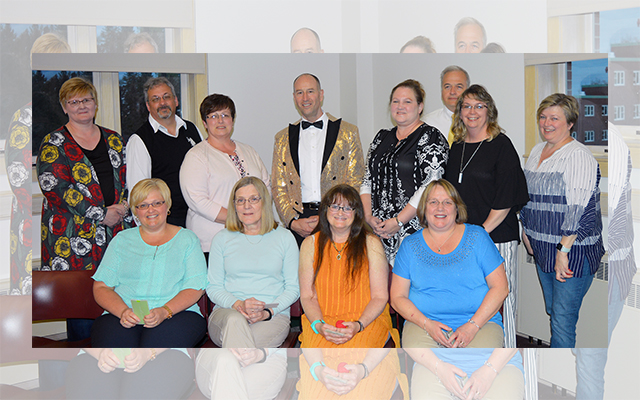 Contributed • July 25, 2019
Northern Light AR Gould Hospital recently honored its employees who have reached milestones in their tenure at the annual employee awards ceremony, held at the University of Maine at Presque Isle Campus Center.

PRESQUE ISLE, Maine — Northern Light AR Gould Hospital recently honored its employees who have reached milestones in their tenure at the annual employee awards ceremony, held at the University of Maine at Presque Isle Campus Center.

A total of 144 employees were celebrated for 2,100 combined years of service.

“Employees are the heart of the organization, and I have great respect for our team, particularly those who have proven their dedication to us and to their community over time,” said Greg LaFrancois, president of the hospital.

Hospital employees were presented service awards for milestone years ranging from five to 40 years of service to AR Gould Hospital.

Honored for 40 years of service were Teresa Clark and Daphne Walsh, both from Mars Hill, and Lana McNamee from Fort Fairfield.

Serving at the hospital for 35 years were: Ricky Bishop of Caribou; Micheline Greaves of Glenburn; and Lorri Jackson, Julee Maynard and Stephen Porter, all of Presque Isle.

Recognized for 30 years of service were:  Patricia Adams of Caribou; Dale Beaulieu and Cheryl Grass, both of Fort Fairfield; Margaret Flewelling of Easton; and Cindy Deschaine, Dr. Roger Pelli and Sue Porter, all of Presque Isle.

Honored for 25 years were:  Cynthia Craig of Masardis; Susan Gilson, Robert MacKinnon and Christine Quirion, all of Presque Isle; and Dr. Jay Reynolds of Fort Fairfield.

To help celebrate the evening, some of the hospital’s leaders donned costumes and played characters in a mystery dinner theater that took place over the course of the dinner, prior to the presentation of awards.

Next year's Caribou City Council will include a new member and a longtime councilor thanks to Tuesday's election.
Pets END_OF_DOCUMENT_TOKEN_TO_BE_REPLACED

Everyone who enjoys the company of a dog knows that sometimes dogs have strange behaviors.  They may arrive in your life with the behaviors already in place, or perhaps they are adopted as a puppy and develop a behavior young.
What's Happening This Week END_OF_DOCUMENT_TOKEN_TO_BE_REPLACED