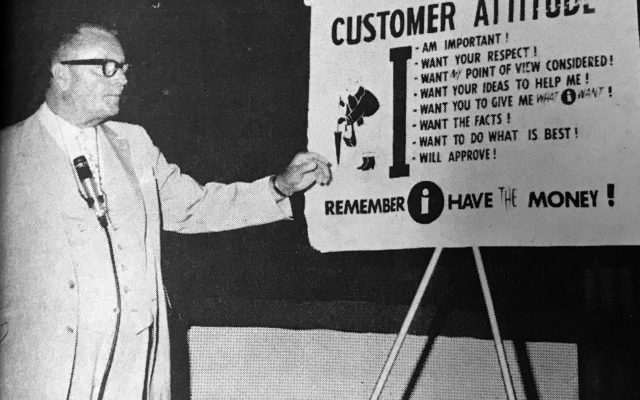 Lanette Virtanen • August 6, 2019
115 Years Ago - Aug. 5, 1904      Additional switchboard — The White Mountain Telephone Company received, Wednesday, a three-position switchboard to be put in their new office in Millar’s block. This switchboard was necessary to relieve the congestion on the present board. The telephone patronage has had a steady and remarkable growth in this town the past year, making it necessary for the company to secure larger office quarters and the switchboard. They have secured two large offices in Millar’s block, back of Powers & Archibald’s office.

Additional switchboard — The White Mountain Telephone Company received, Wednesday, a three-position switchboard to be put in their new office in Millar’s block. This switchboard was necessary to relieve the congestion on the present board. The telephone patronage has had a steady and remarkable growth in this town the past year, making it necessary for the company to secure larger office quarters and the switchboard. They have secured two large offices in Millar’s block, back of Powers & Archibald’s office.

Resigns — Mr. Lester S. Kelso, who held the position of U.S. deputy collector in the Aroostook Customs district during the past seven years, three of which have been in Houlton, has tendered his resignation to take effect Sept. 1. Mr. Kelso has accepted a position with  the International Agricultural Corp. and will be stationed in the Houlton office as chief clerk to Mr. B. H. Brown, the assistant manager, and will make a most valuable addition to the staff as his long experience in clerical work and his genial personality amply fit him for this position.

Purchased business — C.B. Estes has purchased the Drysdale tailoring business and has engaged H.O. Patterson as manager of same, which will be run under the name of the Drysdale Press Shop.

New business — Clarence S. Brayall, for the past 14 years associated with Grant and Daigle, distributors of Amoco Oil products, resigned his position Saturday preparatory to opening his own business in Houlton. Mr. Brayall has taken quarters at Water Street, where he will conduct an electrical and automatic heating business.

Flying service — The Houlton Flying Service was opened this week with headquarters at the Robert Peabody farm in Cary Mills for the purpose of giving flying instructions and to sell plane rides to the general public. Fifteen students have already been enrolled. The service is being operated by Rodney Palmer and Walter Varney with Ed. Stiles, former CAP pilot, of Portland

Wins sewing machine — Mrs. Howard Raymond of Houlton was the winner of a new Bradford sewing machine that she won this week in Grant’s ‘Royal House of Bradford’ contest where customers select ice cubes from a Bradford freezer to ascertain whether or not they are the winners. Presenting the sewing machine was Thom Black, representing the W. T. Grant Co., store at the Houlton Shopping Center on the North Road.

Bazaar of Values — Forth-two leading merchants and business firms in Houlton this week are launching a Bazaar of Values promotion that will continue over the next eight weeks. The banquet and clinic were sponsored by The Pioneer Times and attending were 215 merchants, their sales clerks and service personnel. During the eight weeks of Bazaar of Values most participating firms will be offering special bargains to emphasize that Houlton is a fine place to shop, and that the consumer may shop in Houlton with confidence.

Honored — Dr. Calvin Newman received a certificate for his role as veterinarian for the Houlton Humane Society Shelter. Newman also received a thank-you balloon and a peanut butter pie (his favorite) for his contributions to the shelter.

Donation — Gerry Tidd, representing the Houlton Shop n’ Save associates, presented Jane Root of the Battered Women Project a check for $200 recently. The money was raised during a food and yard sale held at the Shop n’ Save. Also, the Salvation Army was given 14 boxes of clothing.