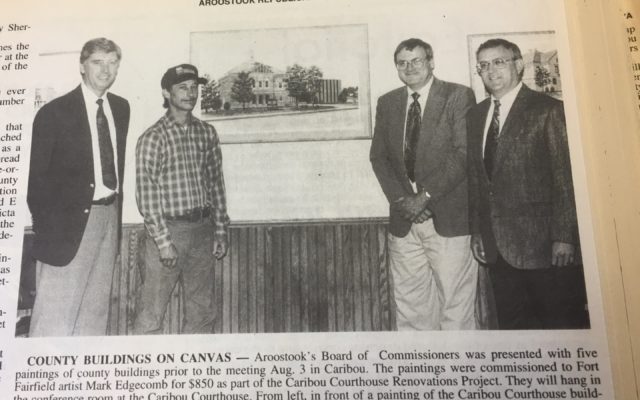 Trains — The West end of the B&A engine house is being stripped preparatory to moving two stalls to the east side, and a large crew of Italians are at work making extra tracks west of the engine house, to convene the Limestone branch, where traffic is increasing fast.

New theater — W.C. Browne opened his new theater in Limestone Tuesday evening by giving an opening ball. Quite a number of people from this town attended the opening.

Music and drums –Handmade native drums will be featured in a band similar to the American Rumba at an entertainment sponsored by the visiting Jamaicans at Caribou High School this Friday evening. Jamaicans Copeland Forbes, Raemore Hunt and Donald French, committee for the evening program, said these drums have been made especially for the entertainment. The program will also be interspersed with native musical selections.

Joins company staff — Washburn Potato Co. has announced the addition of George Robert Umphrey, 29, of Washburn, to its sales staff. Umphrey, a 1958 graduate of Washburn High School, attended St. Lawrence University in Canton, N.Y., graduating in 1962. Upon completion of college, Mr. Umphrey served four years in the U.S. Airforce, a portion of it in Korea. Robert has a background in the buying and selling phase of Maine potatoes, having been on the sales desk several years before joining the staff. While at Washburn Potato Co., he will be handling sales and purchases of both tablestock and seed potatoes. He is married to the former Shirley Mein of Portage, Michigan, and they have one son, Mark Robert. They reside on Wilder Street in Washburn.

Care center receives $1,150 — Donations totaling $1,150 have been received by the board of directors of the Caribou Day Care Center. Through combined efforts of Rev. Richard Hamilton and Rev. Thomas Knox, the United Methodist Church of Maine donated $500 and the Maine Episcopal Missionary Society gave $200. Personal gifts from interested Caribou residents totaled $450. Applications for the Caribou Day Care Center, which is scheduled to open Aug. 25 at the General Carter Armory, still may be obtained at the city office at Teague Park School.

County endorses housing  — Proposed new housing for the elderly in the village of Sinclair was endorsed by the Aroostook County Commissioners at their meeting in Caribou, Aug. 3. Lakeside Associates of Caribou was given a county letter of support to build a 12-unit elderly housing project in Sinclair, officially known as Township 17, Range 4. Now that Sinclair will have a public system, the developers want to build a smaller project. The housing will be named “Martin Manor” after the Martin family who once owned the land located behind the post office.

Restoration in New Sweden  — Maine’s Swedish Colony announces that restoration of the historic buildings in the Swedish Colony has resumed following significant donations by the Ostlund family relatives and others. The current emphasis is on the completion of at least the exterior restoration of the historic Noak Larrson – George Ostlund two-story log home, said Richard Hede, director of restoration and preservation. The Maine State Historic Preservation Committee believes that this is the only two-story log home in Maine dating back to the 1870s, which  was when this home was built, said Hede. With commission support, the log home and the Lars Nook Blacksmith-Woodworking shop have been placed on the Nat’l Register of Historic Places. Several relatives of the Ostlund family which lived in the house from 1910-89 banded together to contribute more than $10,000 towards the project.