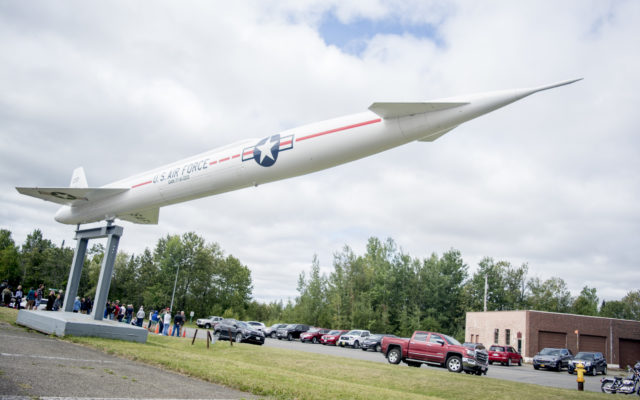 Hundreds come out to remember Loring 25 years after its closure

Chris Bouchard • August 27, 2019
Memories of a robust Loring Air Force Base have not faded, even after a quarter of a century. Residents from northern Maine and across the country gathered Aug. 23 to 25 to meet old friends and reminisce during the 25th anniversary of the base’s 1994 closure.

LIMESTONE, Maine — Memories of a robust Loring Air Force Base have not faded, even after a quarter of a century. Residents from northern Maine and across the country gathered Aug. 23 to 25 to meet old friends and reminisce during the 25th anniversary of the base’s 1994 closure.

To the people of northern Maine, the base was far more than a military installment. Loring had all the makings of a small town, with several stores, recreational offerings, and even its own school. And with the influx of military personnel to rural Maine, the local economy and population saw steady growth while the base was operational. As a result, the 1994 closure dealt a major blow to Aroostook County.

To see a slideshow of images from this event, please click the play button below.  Some may need to allow Adobe Flash to run.

About a dozen members of the Loring Military Heritage Center organization spent well over a year planning the past weekend’s anniversary. Cuppy Johndro, secretary and communications official with the organization, said the “sheer volume of people” in attendance was “overwhelming.”

While Loring has held reunions in the past, Johndro said she has never seen a turnout “of this magnitude,” adding that the 25-year milestone likely brought a multitude of familiar faces back to the former base.

“I think some people who are older realize this could be the last one for them,” she said. “There are a lot of people here in wheelchairs or with walkers and canes. They’re getting older, and so are we.”

Guests and former military personnel walked through the Heritage Center museum and pored through old books, photos, and artifacts from the base’s heyday, and another important piece of the museum’s history was on display outside the building on Saturday.

“The West Gate flag came down on 30 September, 1994,” Johndro said, “and it came back into our possession through Norm MacPherson. He was chief of the fire department here. We had an official flag-folding ceremony and that flag is sitting on a table for people to touch and put their hands on. After today, it will be sealed.”

Guests were treated to a barbecue run by local masons, and vendors who either had ties to Loring, were veterans, or offered Maine-made products.

“We wanted very specific vendors,” Johndro said, “because this is truly a momentous occasion.”

As far as organizing the event, Johndro commended all the museum officials and volunteers for “doing such a great job of coming together and helping.”

In addition to coordinating the anniversary, Johndro served on the base from February 1987 to 1989, and later came back to stay on as an X-ray technician at the 42nd Strategic hospital.

Through her work organizing this reunion as well as reunions in recent years, Johndro said she has not only met old friends, but that she has made new friends who were once stationed on the base throughout its time of operation, but who did not serve with her.

“I know them now because they’ve come back for everyone and their friends,” she said, “and now they’re jumping in and helping out wherever they’re needed.”

She added that, through these reunions, everyone is helping to keep a part of history alive by sharing their memories.

Among the many veterans in attendance, Brandy Buttrick had the unique opportunity of flying the very last airplane out of Loring as part of a military mission.

He says Nov. 16, 1993, was a bittersweet day. It was raining, and the snow had just started to fall. Local television crews gathered around the runway as Buttrick boarded the plane with his wing commander, squadron commander, and the base chaplain. They took off for Davis-Monthan Air Force Base in Tucson, Arizona, 3,000 miles away.

“There was no functioning radar on the aircraft itself because it was the last airplane here,” he said, “so we flew with the help of ground-based radar and navigation equipment. Every step of the way, across the country, it took us six and a half hours to get down to Tucson, Arizona.”

Once in Tucson, Buttrick and his crew were greeted with champagne from military personnel on the base. They also knew it would likely be Loring’s final flight.

Buttrick and his wife, who now live in their home state of New Hampshire, embarked on another six-hour trip, albeit on the ground this time, to drive to Loring’s anniversary event.

Throughout his military career, Buttrick said he’s had more than 4,000 flying hours, including 10 combat missions during Desert Storm.

He said that while the general attitude surrounding the base’s closure was sad and bittersweet, “we understood that it was a political decision.”

Life on the base, according to Buttrick, was “unique,” given its rural surroundings.

“Without any major metropolitan areas around,” he said, “everybody kind of stayed on base. They didn’t travel far on the weekends. We all became part of a community, and there were events almost every weekend that you could plan on, whether it was barbecues, parties, or club meetings, there was plenty to do around the base.”

He said he preferred being stationed in smaller, isolated areas because of the camaraderie and tight-knit atmosphere, plus Loring was close to his home in New Hampshire.

“As a matter of fact,” he said, “it’s where the driving range is now for the Limestone Country Club.”

And while the elementary school has been torn down along with some of the hangars, he was thrilled to return to the base and see the remaining hangars and buildings still standing from its heyday.

“It’s fun to see this stuff again,” he said, “but in some ways it’s also very sad. I’m very, very thankful to Cuppy and Ray Hildebrand [president of the Loring Heritage Center] for keeping these memories alive.”

Hildebrand, like Johndro, said he was impressed by the event’s large turnout, and said the reunion was a great opportunity for reconnecting with old friends and sharing memories from a quarter of a century ago.

“Don’t try that with any other vehicle,” he added.

Hildebrand said his time on the base involved copious amounts of training which prepared him and other Air Force pilots to react to situations without thinking. In addition to constant practice and training, he said that, for many stationed on the base, learning to live away from family, especially during the holidays, could be “a little depressing.”

“But you know what?” He said. “Others did it before us, and others are going to do it afterward.”

When military personnel first arrived on the base, Hildebrand said “many a young bride was scarfed up by the young airmen here,” and this resulted in several local families having a “personal connection” to Loring.

“At the same time,” he said, “these people were paid and lived in base housing rent-free. So a lot of spendable income landed in local communities, and businesses thrived.”

Loring’s presence also boosted the memberships of local groups and organizations significantly, Hildebrand said, adding that this all resulted in the base improving The County on multiple levels.

“And all of a sudden,” he said, “to get that yanked, it left a pretty big hole in The County.”

Aside from all of the special events, food, museum offerings, ceremonies, and B-52 flyover, Johndro said the reunion gave everyone an opportunity to listen to the stories of those who served and lived on the base during its time of operation from 1953 to 1994.

“Eventually, those stories are going to fade away,” she said, “unless someone carries it on. And that’s the important part. If you carry on someone’s story, they’ll never die.”

I was mentioning to our board of directors this past week that I got a quarterly report from a large online retailer who will donate a portion of my purchases to a charity I select.
Campaign Corner END_OF_DOCUMENT_TOKEN_TO_BE_REPLACED