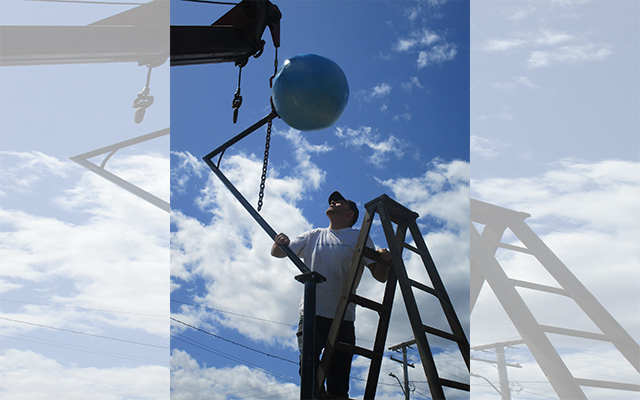 Planet Uranus model returns to ‘orbit’ thanks to local volunteers

Melissa Lizotte • August 31, 2019
After being absent from its place along Route 1 in Bridgewater since the winter months, the planet Uranus is now set in “orbit” along with the additional seven planets and three dwarf planets in the Maine Solar System Model.

PRESQUE ISLE, Maine — After being absent from its place along Route 1 in Bridgewater since the winter months, the planet Uranus is now set in “orbit” along with the additional seven planets and three dwarf planets in the Maine Solar System Model.

The Maine Solar System Model currently extends 95 miles from University of Maine at Presque Isle to the dwarf planet Eris in Topsfield, a town in Washington County, and also includes a 50-foot-diameter “sun” at UMPI’s Northern Maine Museum of Science.

Community volunteers from schools, colleges and construction companies built the model over a period of four years between 1999 and 2003, and added dwarf planets in 2008.

Rachel Rice, UMPI director of marketing and communications, said that the Maine Solar System Model is the largest such model in the Western Hemisphere. The model has become a major attraction for people from outside of Aroostook County who visit the area.

“Just last week I ran into a couple from Lancaster, Pennsylvania, on campus who were headed to Loring [Air Force Base]. They were looking for the sun and said they planned to stop by all the planets,” Rice said, referring to the former Air Force base’s 25th anniversary celebration. “That happens a lot.”

UMPI professor of geology Kevin McCartney said that throughout the past two years he and volunteers have begun inspecting the planets to determine the level of repairs needed. The majority of work, he noted, has involved replacing the Fiberglass exterior, which minimizes weather-related damage over time, and painting the planets using Fiberglass paint instead of ordinary house paint.

Uranus, the seventh planet in the model, recently became the third planet — after Neptune and Jupiter — to be repaired and was returned to its spot on Route 1 in August.

Employees from Beaulieu’s Garage in Caribou have helped take down and return the planets to their posts, while students in Bob Collins’ auto body class at Northern Maine Community College replaced the Fiberglass exteriors.

“I’m hoping that the planets will be all set for at least 20 years,” McCartney said.

McCartney expects that Saturn will be the next planet to undergo repairs within the coming year. There are also plans underway to add two more dwarf planets — Haumea and Makemake — in Lille and Madawaska, respectively. Once the dwarf planets are complete, the Maine Solar System Model will stretch 160 miles from north to south.

Currently work is being done to place the model of the sun outside UMPI’s Folsom Hall instead of inside to allow for a more interactive educational experience, much like what the planet models have provided.

Around 700 local individuals have been involved with building and maintaining the Maine Solar System Model since its beginnings in the late 1990s, all without donations or other financial support.

McCartney said that the model’s humble beginnings and continuing support from the community make it a one-of-a-kind project.

“The model was built as a community project and I think it’s something that the community is proud of,” McCartney said. “It’s still the second largest solar system model in the world and I see people all the time who tell me that it’s the most accurate.”

Only one member of Maine’s congressional delegation had come out in favor of impeaching President Donald Trump ahead of House Speaker Nancy Pelosi’s Tuesday announcement that the Democratic-led House of Representatives would begin an impeachment inquiry.
Pets END_OF_DOCUMENT_TOKEN_TO_BE_REPLACED

We think a cat can make for the best pet in the world. To truly love a cat, you must learn to accept them for what they are -- unpredictable and quirky, which is something unique and unlike any other pet.
Campaign Corner END_OF_DOCUMENT_TOKEN_TO_BE_REPLACED