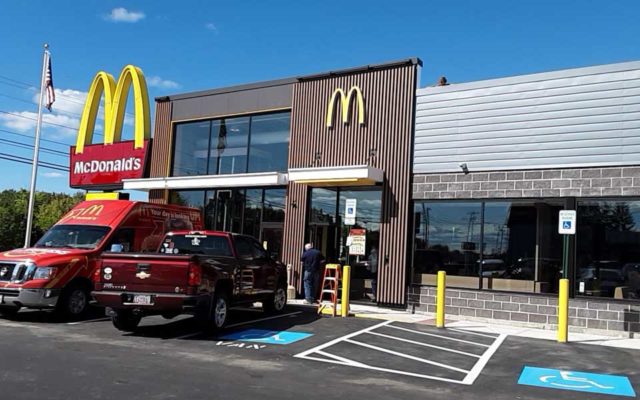 Melissa Lizotte • September 6, 2019
After three months of construction, the new McDonald’s building on Main Street in Presque Isle opened its doors to customers on the morning of Friday, Sept. 6.

PRESQUE ISLE, Maine — After three months of construction, the new McDonald’s building on Main Street in Presque Isle opened its doors to customers on the morning of Friday, Sept. 6.

Hundreds of anxious customers filled the parking lot and new double drive-thru throughout the day. In the afternoon owners Heidi and Daryl Abbotoni, their daughter Sarah Abbotoni, manager of the Presque Isle McDonald’s, the Central Aroostook Chamber of Commerce, City Council members and teachers and students from Pine Street Elementary School gathered for a flag-raising ceremony from the Presque Isle Elks Club and Loring Job Corps Color Guard, a performance of the national anthem and the formal ribbon cutting ceremony.

“We’re glad to be open again and I think the public is also very happy that we’re back,” said Heidi Abbotoni.

The Abbontonis also own McDonald’s restaurants in Caribou, Houlton, Lincoln and Calais, all of which have undergone renovations in order to achieve more modern building designs.

Heidi Abbotoni noted that the concept of the double drive-thru came about to alleviate much of the heavy traffic that came from the former single drive-thru. Previously the drive-thru was located near the front entrance of the building, which often led to cars backed up on Main Street and slower traffic flow.

The region around the new building also includes two entrance and exit areas, one on Main Street and the other on North Street. The McDonald’s corporation purchased and demolished a building formerly located on North Street to make room for additional parking and the drive-thru.

The Play Place, which includes many tables and chairs, instantly became a popular destination for young children and their parents on Friday afternoon.

“I like how the Play Place is larger,” said Julia Gorneault of Presque Isle, as her daughter Brooklyn climbed inside the new play area. “What they had before was smaller and she would get bored quickly.”

Brooklyn is a kindergarten student at Pine Street Elementary School and one of numerous children who will benefit from a new school library, which will be partially funded by 10 percent of the Presque Isle McDonald’s Sept. 6 and 7 sales.

Elisha Smith of Presque Isle had good things to say about the new McDonald’s as her children Lydia, 7, Cameron, 4, and J.R., 1, excitedly dug into their Happy Meals.

“We come here often, so it’s great that this space is larger and has more parking spaces,” Smith said.