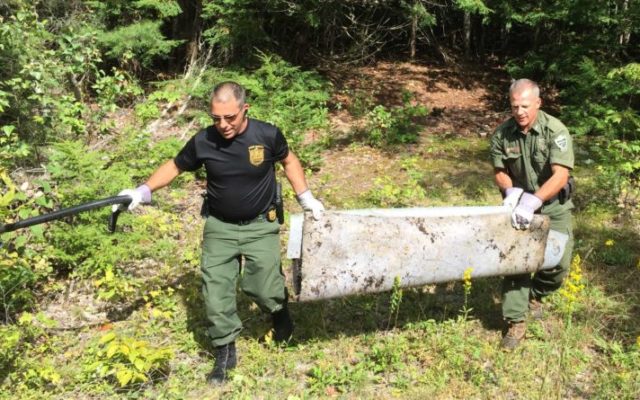 Once filled with debris, Maine’s forests are getting clean thanks to outdoor enthusiasts

John Holyoke • September 11, 2019
A few short years ago, when Maine’s game wardens and forest rangers began teaming up to fight the ugly problem of woodland dumping, the state’s forest was filled with places where people had decided to discard their unwanted tires, appliances and other debris.

A few short years ago, when Maine’s game wardens and forest rangers began teaming up to fight the ugly problem of woodland dumping, the state’s forest was filled with places where people had decided to discard their unwanted tires, appliances and other debris.

Today, as those two agencies prepare for the sixth Landowner Appreciation Cleanup Day on Sunday, Bangor game warden Jim Fahey has some good news to report: After hauling out more than a million pounds of debris from the woods over the past five years, finding those ugly dumping sites is getting more difficult.

“There’s guys that are having a hard time finding a place to clean up,” Fahey said.

The day originated as a way for outdoors clubs to give back to those landowners who allow them access to private land, with those clubs volunteering to remove trash from sites that had previously been identified as problem areas by the Maine Warden Service and Maine Forest Rangers.

The trash is taken to centralized sites where dumpsters have been set up by sponsors Waste Management and BDS Waste Disposal. Prizes are given to the clubs that pick up the most truckloads of litter. Tires are held separately in piles at designated sites.

Fahey said that in the beginning of the cleanup program, wardens and rangers knew of plenty of sites that needed attention.

“The first couple years, you had decades and decades worth of stuff [in the woods] in some cases,” Fahey said. “Every year that goes by naturally, those sites aren’t there anymore.”

And Fahey has noticed an interesting pattern over the years. When sites are cleaned up, people are less likely to view them as dumps and add debris to them.

“You get a big pile of tires, and people can justify perhaps adding to it, even though they shouldn’t,” Fahey said. “But once something is cleaned up, it seems like people are, are less likely to reestablish an old site.”

According to past BDN reports, volunteers targeted 150 sites for cleanup in 2016. A year later, that total was 130. Last year, only 110 sites needed attention.

And that progress will likely pay dividends in the form of continued recreational access on private land, Fahey said.

Fahey maintains that most forest dumping is not done by sportsmen. Instead, it is those who don’t respect the land and who cannot be bothered to take trash and debris to the transfer station. But those who would like to recreate on private land can be the ones who pay the price when access is cut off by landowners who get tired of their property being abused.

“I think [this program] shows that we care, and we’re not putting our head in the sand and telling [landowners] to find their own solution,” Fahey said. “And it shows that the stakeholders [who volunteer] care … this just fosters that relationship, that you’ve got good stakeholders that are willing to be part of the solution.”

Clubs or individuals looking for more information can call Virginia Vincent at 207-287-5240 or email her at virginia.vincent@maine.gov