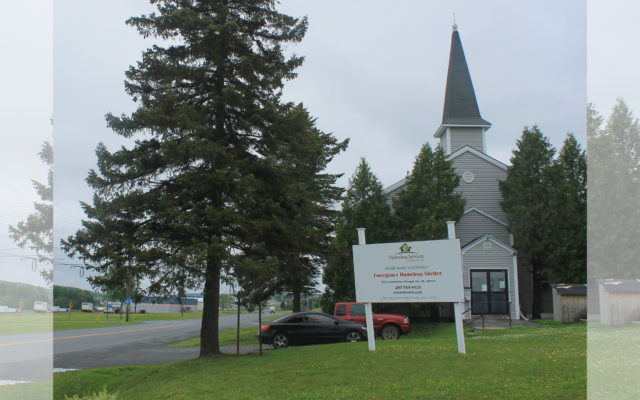 Anthony Brino • September 11, 2019
Homeless Services of Aroostook, which operates one of three “low barrier” shelters in the state, is planning to open a new day center in the hopes of better serving people experiencing homelessness in northern Maine.

PRESQUE ISLE, Maine — Homeless Services of Aroostook, which operates one of three “low barrier” shelters in the state, is planning to open a new day center in the hopes of better serving people experiencing homelessness in northern Maine.

With an average of seven people staying in the Bridges shelter each night, the organization has decided to pursue a new addition offering a day-long program, said Stephen Eyler, executive director of Homeless Services of Aroostook.

“We’re able to help a lot more people than we have in the past,” Eyler said. “Two months into the program, we’re now averaging around seven people every night. That number we expect to continue to grow as the temperatures start to cool off.”

Eyler said the organization is looking for space near its shelter on Central Drive and is aiming to open the day program by the end of the year.

People staying in the Aroostook Bridges program check in by 9 p.m. and leave by 7 a.m. A day program would offer those and others a place to spend some of their day, receive a meal and connect with services for housing, employment, transportation or healthcare, Eyler said.

“Housing, employment and transportation are the top three issues for the folks we serve.”

Homelessness is a long-standing problem in Aroostook County that is “becoming more visible,” and sometimes running in tandem with addiction and mental illness, Eyler said.

“Aroostook County and Presque Isle are very removed from the rest of the state and the rest of the country, but homelessness is a crisis that everyone everywhere in the country is experiencing. If you go to an urban area, it’s not unusual to see people on corners with a cardboard sign asking for help or pushing a shopping cart with everything they own.”

Eyler said that Homeless Services of Aroostook, now in its 35th year of operation, is aiming to keep up with the needs of people experiencing homelessness and related challenges.

“We’re adapting our programs to better serve Aroostook County,” he said, adding that people can “let us know if they have concerns or have seen someone at a place for several nights that needs help.”

Homeless Services of Aroostook is one of only three housing shelters with a “low-barrier” option that admits anyone, along with shelters in Bangor and Portland.

In starting the new program, Eyler said that Homeless Services of Aroostook visited with and followed the template of the low-barrier shelter at Hope House in Bangor, run by Penobscot County Health Care.

“One of the things that a lot of folks have apprehension about in serving the homeless population is safety and a stigma of danger,” Eyler said. While the organization prioritizes safety, Eyler said they also focus on fostering trust.

“We’re meeting folks where they are and establishing a relationship of trust, so we can help them address their issues without creating an intimidating environment.”

A familiar face to Aroostook County residents has announced her candidacy for the Maine State Senate.
Pets END_OF_DOCUMENT_TOKEN_TO_BE_REPLACED

When 14-year-old Isaiah Belyea of Caribou began volunteering for Halfway Home Pet Rescue three years ago, he never imagined that his love for animals would quickly turn into a budding career.
What's Happening This Week END_OF_DOCUMENT_TOKEN_TO_BE_REPLACED