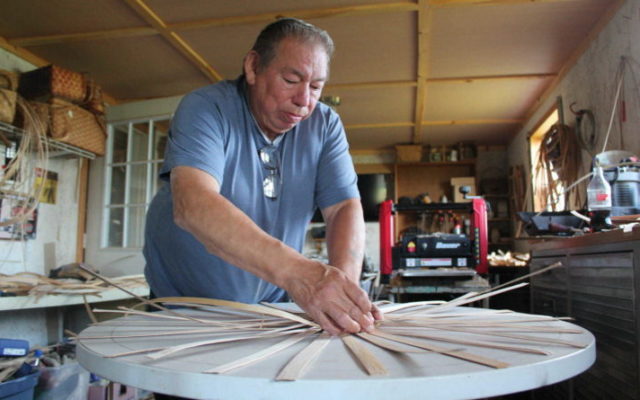 By Robbie Feinberg, Maine Public • September 18, 2019
In northern Maine, the Aroostook Band of Micmacs has for decades been trying to protect important tribal cultural resources, including traditional foods, from pollution. And warming temperatures are expected to further that threat. But the Micmacs and other Maine tribes are taking steps to adapt.

In northern Maine, the Aroostook Band of Micmacs has for decades been trying to protect important tribal cultural resources, including traditional foods, from pollution. And warming temperatures are expected to further that threat. But the Micmacs and other Maine tribes are taking steps to adapt.

In a tiny studio nestled in his backyard near Houlton, Richard Silliboy gathered, split and weaved together long thin pieces of ash that will eventually form a basket. The vice chief of the Aroostook Band of Micmacs, Silliboy said he learned the art as a child from his mother, who’d craft up to 120 baskets a week that were used by workers in the nearby potato fields.

As he sat and weaved, Silliboy described the practice as spiritual and part of the tribe’s creation story.

Those problems include the threats to ash trees and other cultural resources from the environmental effects of invasive insects and a changing climate.

Corey said pollution and contamination of waterways have diminished the supply and quality of culturally significant food sources such as wild brook trout. And now some reports indicate that trout could be at risk of losing cold water habitat in some areas due to factors including reduced stream flow and warming water temperatures.

“Brook trout fishing has been a legacy that many families in the tribe have practiced for thousands of years. And to see that practice eventually go away, or our brook trout become so fragile that we’re not able to fish for them, is really scary for the future,” he said.

“These are all, both, scary situations. But also I see, on the tribal side, a great ability and a resilience to respond to these potential challenges,” said Darren Ranco, a professor of anthropology at the University of Maine in Orono who has worked with tribes as they prepare and adapt as climate change threatens important species such as moose, long hunted as a source of food and now under pressure from infestations of winter ticks.

[Deep Gulf of Maine has been warming twice as fast as the surface, study finds]

Ranco said in the effort to adapt to these pressures, it’s important that indigenous knowledge and science be considered, along with expertise from outside of the tribe.

“The worst thing we can do is just have some expert at some high level make a decision that impacts so many people, if they haven’t really embedded themselves in what’s really important to those to those local people,” he said.

To adapt to present and possible future threats to brook trout, the Micmacs have decided to grow the fish themselves. More than 30,000 trout swim inside two giant, bubbling tanks at a hatchery they’ve built in Caribou. While some of the fish head to restaurants or markets, the tribe estimates that nearly a third are distributed to its members.

[The number of days when it feels really hot in Maine will surge by midcentury, a new report says]

Environmental specialist David Macek said the hatchery offers a way to provide a sustainable, clean food source for the Micmac community while conserving trout populations in the wild.

“It’s really important because we know it’s going to be available. We know where it’s coming from. We know how it’s being produced. And it’s going to be there, even as climate change might start taking a toll on the wild stock,” he said.

The tribe is also planning for other climate related changes, including a study of the effects of mosquitoes and potential vector-borne diseases, which staffers hope will begin next year. Tribal officials said they want to be proactive and learn from other tribes across Maine and the country to preserve the resources they have relied on for centuries.

It was a freezing day across The County, but you could hardly tell from the turnout. Even after a massive surge in absentee ballot requests across the Central Aroostook area, droves of people came out to vote in Presque Isle, Mapleton, Washburn and Fort Fairfield.
Pets END_OF_DOCUMENT_TOKEN_TO_BE_REPLACED