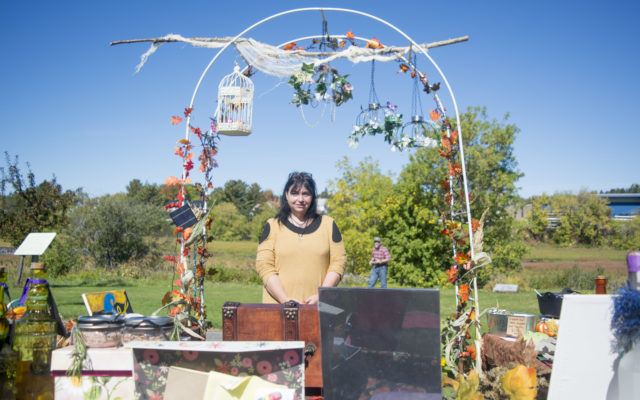 Northern Maine Pagan Pride Association Treasurer Karralena Castaway said this particular celebration is the fourth Pagan Pride Day held in the area, adding that no events were held for the past couple of years due to organization officials changing positions, and members stepping down due to illness or personal reasons. 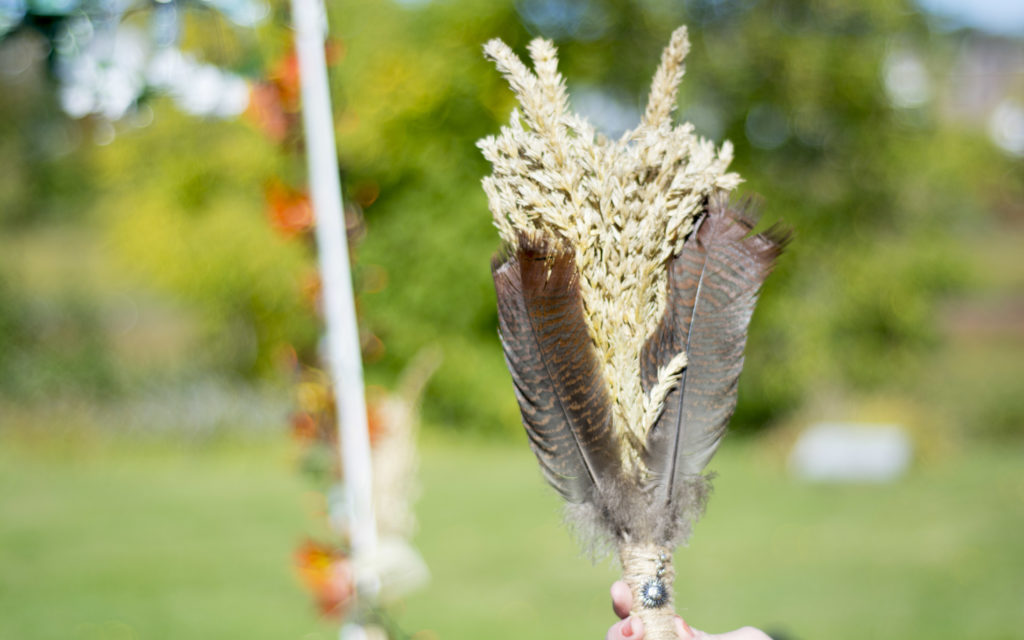 Marie Deforge shows a ceremonial fan offered through her business Enchanted Gaia. The fan pictured is intended for honoring Mabon, or the autumn equinox.
(Chris Bouchard)

A diverse assortment of food was served, and local vendors offered handmade items related to the event’s theme such as moon water, ceremonial fans, clay wands, necklaces and earrings.

“People could say they’ve heard something about Paganism,” Castaway said, “and then ask a Pagan if it’s true or not.”

Castaway said the intent is to ideally set the record straight concerning misconceptions surrounding Paganism. For example, she said many believe that Paganism only includes Wiccanism.

“Wicca is only one aspect,” she said. “Paganism encompasses a whole lot more than just Wicca, such as Druidism and Shamanism.”

Another common misconception, Castaway said, is the belief that Pagans practice “dark magic.”

“There isn’t really good or bad magic,” she said. “There is light magic, which would be healers, and then what people refer to as dark magic is more like karmic magic. If an injustice is done and needs to be corrected, then you need a darker, or karmic, magic to do that.”

Most Pagans, according to Castaway, follow not a light or dark path, but a gray path, which involves both healing and karmic magic.

Ultimately, she said Pagans are no different than any other person — they just hold a different set of beliefs.

“The best way to describe the difference between Paganism and Christianity,” Castaway said, “is that Christianity is more focused on a dominating male figure whereas Paganism concentrates more on feminine energies.” 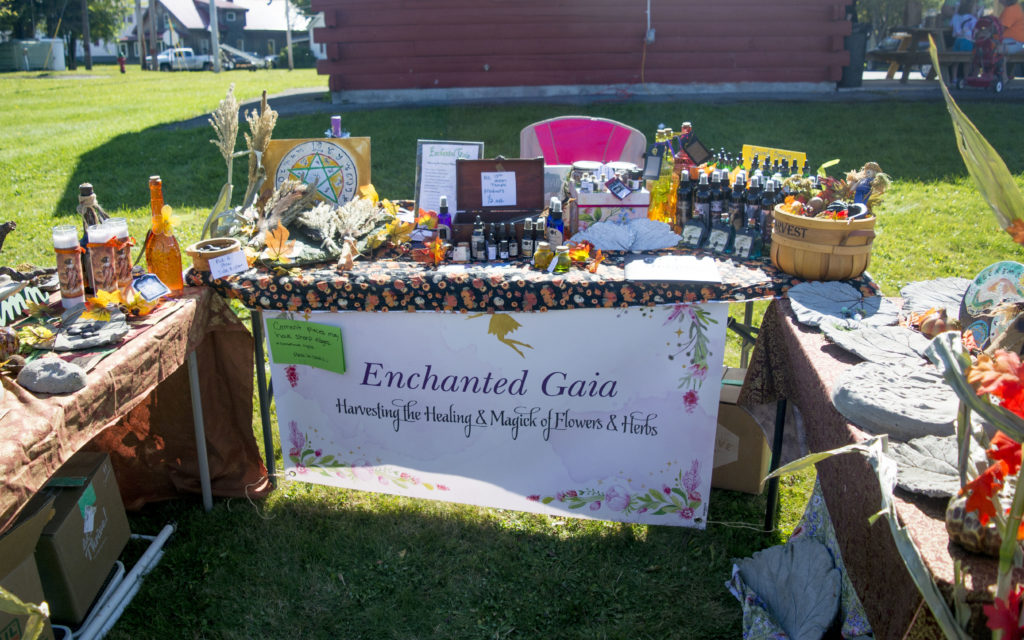 This aspect of Paganism influenced Castaway to get involved “many, many, many years ago.”

“I felt like something was missing with Christianity,” she said, “something just didn’t sit right. With Paganism, there’s no dominant male figure; instead there’s a balance between the two. You don’t have one in a higher position than the other; they’re both equal, and that really speaks to me.”

As far as an overarching or guiding philosophy behind Paganism, Castaway said each Pagan could potentially follow a different set of principles because many will adhere to unique combinations of beliefs.

“Someone may be of Scottish descent,” she said as an example, “but find that they have an affinity for an Egyptian deity, so they incorporate that with their beliefs.That would be an example of an eclectic belief system, but some are also very strict and closely follow set guidelines.”

Castaway also discussed some of the more common misconceptions of Paganism.

“It’s not the same as Satanism,” she said. “Pagans don’t do any sacrifices with children. They don’t steal souls, and they don’t try to kill people by hexing them or anything like that.”

The stereotype that “witches fly on brooms” is also a misconception based on astral projection, Castaway continued.

“There are all kinds of things tied to witches that are metaphors,” she said. “A witch flying on a broomstick is actually a metaphor for astral projection.”

Marie Deforge, who sold a myriad of items through her business Enchanted Gaia, which specializes in “Harvesting the Healing & Magick of Flowers & Herbs,” said that she would consider herself a Green Witch, as she is very much involved in nature and working with plants, animals and flowers. 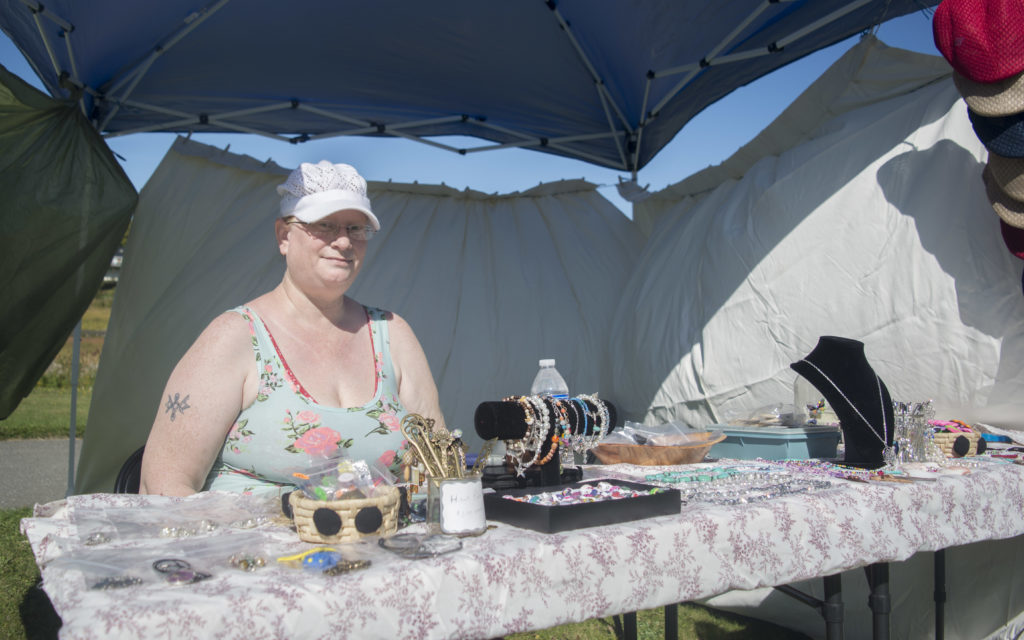 Michaela Sainte, who owns the business The Hope Chest, with her husband, offered a number of handmade items during the Sept. 21 Pagan Pride Day event in Caribou
(Chris Bouchard)

The items offered via Enchanted Gaia were based on the “healing that comes from being one with nature,” she said.

“When I’m out in the gardens, I feel more alive, vibrant, and more who I truly am,” she said. “So I want to entice people to get into gardens and create sacred spaces for themselves. The energy from the flowers, trees, and the earth is all here for us. They’re a part of us and we’re a part of them, so when we come into alignment with their energies we feel the healing that they offer.”

Deforge said the act of gardening and working with plants allows her to “tap into a past life.”

“I really feel it when I’m working with a mortar and pestle and grinding herbs,” she said. “It transports me back hundreds of years.”

Deforge also works as a Shamanic healer, a process that she said allows her to discover herself more each time she practices it.

Like Castaway, Deforge said she’s in support of more events centered around Paganism and alternative belief systems in the area, as it may correct the “stigma” associated with them.

“There are many different forms of expression,” she said, “and I think people sometimes see this as dark or evil, but that all depends on the person. It’s the intent that goes into it. Anybody can do energy work. Anybody has the ability to channel energy through them. It’s just their intent that can bring through either love and healing or ill will and chaos.”

Bearing this in mind, Deforge said the vast majority of those interested in or involved with Paganism are more involved with “the lighter side,” adding that she has “rarely come across anyone who is doing it for the wrong reasons,” which is typically for self gain or at the expense of another.

Michaela Sainte, who sold items through a business she and her husband own called “The Hope Chest,” agreed that she’d also like to see similar events take place in Caribou, as it can bring “all kinds together.”

“It’s not just Pagans that come out here,” she said. “I’m not Pagan; I’m here because I want to share my art; to be able to give something beautiful to take home.”

Sainte follows a Guardanian faith, an old religion that she said is Christian-based.

She said her husband created small wands made of polymer clay, geared toward kids and preteens who are interested in Harry Potter, while she created earrings, bracelets and necklaces.

At the end of the day, Sainte said Pagan Pride Day is an opportunity to get out into the community and learn more about different people and their beliefs.

Castaway also said that Pagans are very tolerant of other people and their beliefs.

“We are not hateful people,” she said. “If you don’t force your religion on us, we won’t force ours on you, and I think that goes for not just Pagans, but anyone. Hate groups are the one thing we do not tolerate. We have a hard time with those, because no one person is better than any other.”

It was a freezing day across The County, but you could hardly tell from the turnout. Even after a massive surge in absentee ballot requests across the Central Aroostook area, droves of people came out to vote in Presque Isle, Mapleton, Washburn and Fort Fairfield.
Pets END_OF_DOCUMENT_TOKEN_TO_BE_REPLACED