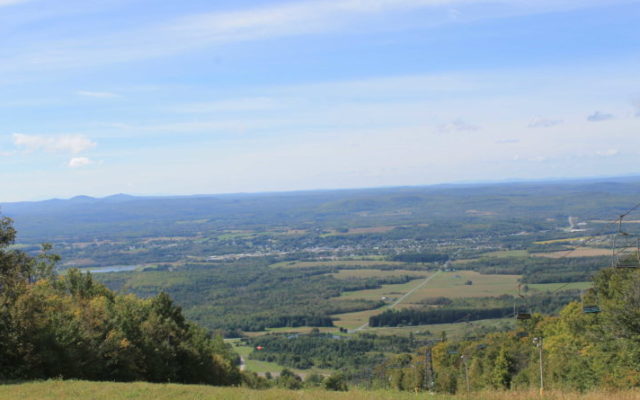 Susan Sharon, Maine Public • September 25, 2019
More than 40 residents of Aroostook County turned out for a legislative forum Tuesday night in Fort Kent to weigh in on the use of aerial herbicides by the forest products industry.

More than 40 residents of Aroostook County turned out for a legislative forum Tuesday night in Fort Kent to weigh in on the use of aerial herbicides by the forest products industry.

Some are urging lawmakers to pass a bill, sponsored by Democratic Senate President Troy Jackson of Allagash, that would ban the practice.

“You know, my community has had spraying all around it, and over time more and more people have talked to me about this — you know, they don’t like that this is going on. They don’t think it’s safe,” Jackson said. “You know, we’re finding out more and more that this is probably not good for people. And so it just came to the point where I felt that it was important to at least give the community that I live in, and to a greater extent the state, the opportunity to air their concerns about this.”

Introduced earlier this year, the bill is being carried over to the next session to give lawmakers more time to study the issue. And while there are concerns from residents about the effects of herbicides like glyphosate on human health and wildlife, members of the forest products industry say they are an essential tool for forest management.

Nick Baser, a Presque Isle resident and forester with Seven Islands Land Co., said every effort is made to minimize the use of chemicals.

“It’s not the first tool we go to, but in instances — like with clearcuts — you create a very complex situation where you have a lot of competition, and so it’s a very effective tool to control that competition, to promote the species that everyone in the state of Maine desires,” Baser said.

Currently, the U.S. Environmental Protection Agency classifies glyphosate as unlikely to be carcinogenic to humans but the World Health Organization classifies it as “probably carcinogenic.”

According to the Maine Forest Service, about 12,000 acres were treated with aerial herbicides in 2017, the most recent year for which data is available. As part of their informational gathering, members of the Legislature’s Agriculture, Conservation and Forestry Committee were expected to visit some of those areas beginning Wednesday.

For all it does to refresh us, burn energy and keep us sharp, we all need playtime, dogs and cats included. Sharing playtime with pets has the added benefit of strengthening the bond between us, so we better understand one another.
Campaign Corner END_OF_DOCUMENT_TOKEN_TO_BE_REPLACED