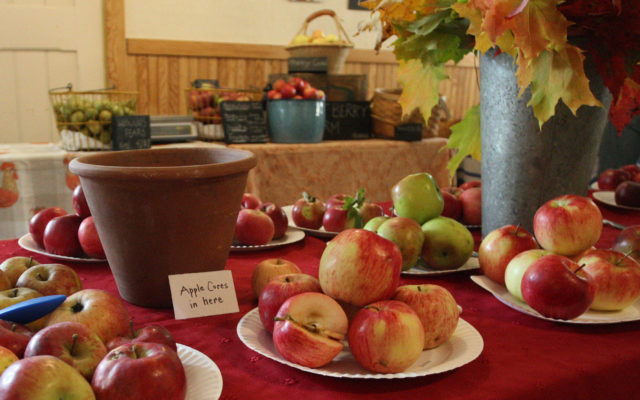 Joseph Cyr • October 8, 2019
Those who wondered how many different types of apples there were in Maine, and better yet, what they tasted like, descended on Houlton Saturday for “Aroostook Apple Day.”

HOULTON, Maine — Those who wondered how many different types of apples there were in Maine, and better yet, what they tasted like, descended on Houlton Saturday for “Aroostook Apple Day.”

A variety of interesting workshops, fruit tastings, displays and fruit tree sales were among the day’s activities.

“We have been trying to do something similar to the awesome MOFGA (Maine Organic Farmers and Gardeners Association) Apple Day,” explained Angie Wotton of the Southern Aroostook Soil and Water Conservation District. “We have a lot of knowledge here in The County, so we decided to host an event here, especially with the resurgence of people starting orchards.”

According to the Maine Pomological Society, it takes about 36 apples to create one gallon of apple cider; two pounds of apples to make one 9-inch pie; and apple trees take from two to 10 years to produce their first fruit depending on the variety and whether they are dwarf or full-sized trees.

There are well over 100 varieties of apples currently grown in Maine, but most farms only grow about 20 to 30 different varieties. Currently, McIntosh is the most commonly grown variety in New England and remains one of the top 10 most widely grown varieties in the United States.

One of the highlights of the event was the old-fashioned apple cider press Dee Cote borrowed from the Southern Aroostook Agricultural Museum, which allowed visitors to use a hand-crank cider press.

Karen and Gerald Morey of Hodgdon were among the first in line to try out the cider press.

“We have always wanted to try to make our own apple cider,” Karen Morey said. “Instead of spending all that money on a new (press), before we knew if we liked it, we figured we would come here today to see if we like it.”

A series of workshops discussed the history of apples in Aroostook County, cider making for sweet and hard cider and vinegar, holistic orchard management, and local growers’ issues and tips.

Joyce Transue said she came to the event because she was trying to identify the wild apple orchard growing on her property in Hodgdon.

“We have had an abundance of apples this year — more than we have ever seen before,” she said. “My husband has lived on the property for 35 years and never seen so many apples. I think the season was just perfect for growing.”

The Houlton event was first held in 2016 and will take place every other year going forward, organizers said.

A few years back the Ark was gifted with something that we never dreamed possible. It is a gift that left us speechless and opened a whole new door for us.
Campaign Corner END_OF_DOCUMENT_TOKEN_TO_BE_REPLACED