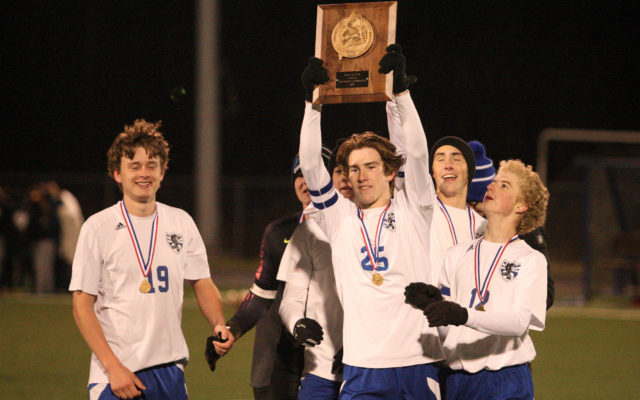 Joseph Cyr • November 8, 2019
The monkey is finally off the back of longtime Central Aroostook boys soccer coach Wally Endy.

PRESQUE ISLE, Maine — The monkey is finally off the back of longtime Central Aroostook boys soccer coach Wally Endy.

Appearing in his fifth regional soccer championship as coach of the Panthers, their third consecutive trip to the Class D north finals, Central Aroostook finally broke through Wednesday evening at the Johnson Sports Complex in Presque Isle. 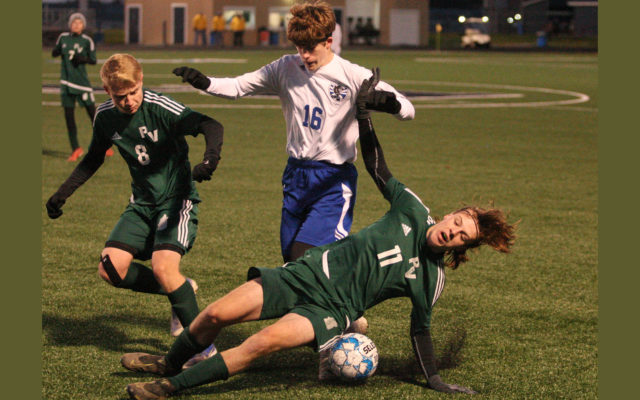 Penobscot Valley’s Alex Tash falls to the ground Wednesday evening as he knocks the ball away from Central Aroostook’s Cody McCrum during the Class D North boys championship in Presque Isle. Also in on the play is PVHS’ William Brown. (Staff Photo/Joseph Cyr)

No. 2 Central Aroostook (14-0-3) pulled off a thrilling 2-1 overtime win over top-ranked and previously unbeaten Penobscot Valley of Howland. Panthers junior Bryan Anthony converted a pass from senior Hayden Kingsbury with about 5 minutes remaining in overtime for the win.

Last season, Central Aroostook fell 3-2 to PVHS in the regional championship. Two years ago, the Panthers lost 1-0 to Bangor Christian. 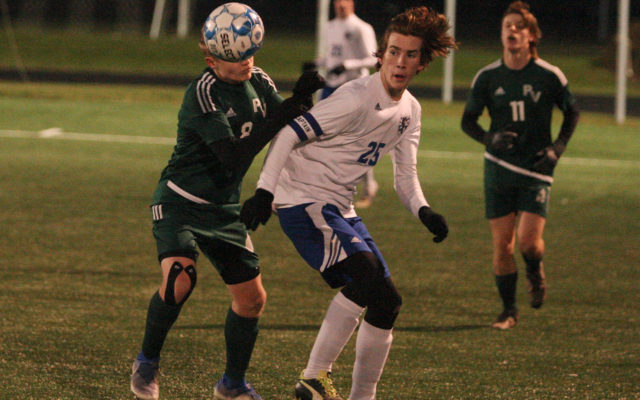 “This feels great,” Endy said. “I have waited a long time for this win. These guys were determined to win this game tonight against a very tough opponent.”

Playing in a bitterly cold and blustery game on the artificial turf, the senior-laden Panthers played a physical game against PVHS (16-1), using their size and strength to their advantage for much of the night. 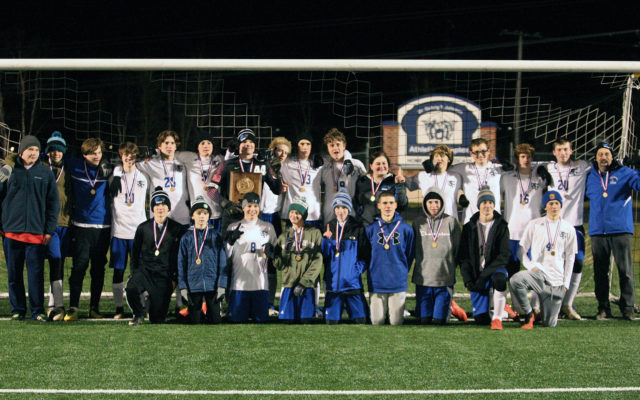 “Getting to the ball was key for us tonight, and that’s how we have played all year,” Endy said. “I have coached most of these guys since 6th grade, so to break through with them feels really great, and I am so happy for them. We knew this was going to be a great game. PVHS is a top-notch club.”

The Panthers held a 44-12 advantage in shots. CA senior keeper Bradyen Bradbury made six saves, while Lance Neal had 15 stops.

Zach Doore put PVHS up 1-0 early in the first half as he scored with 20:15 to play on a beautiful pass from Nick Reed.

CA tied the game at 1-1 with 17:17 remaining in the second half as Anthony scored on the rebound of a shot by Jacob Carvell.

“The past two years we lost in the regional game so to get this win tonight feels pretty great,” Anthony said. “To get that goal in overtime was amazing. After I scored, the only thing I saw was the crowd jumping up and down and my teammates running to hug me. It was crazy.”

Just when we thought we were out of the woods with kitten season, it has hit full force.  The past few days have been difficult answering the phone and hearing the stories of why people have litters of kittens they need to surrender.
Campaign Corner END_OF_DOCUMENT_TOKEN_TO_BE_REPLACED