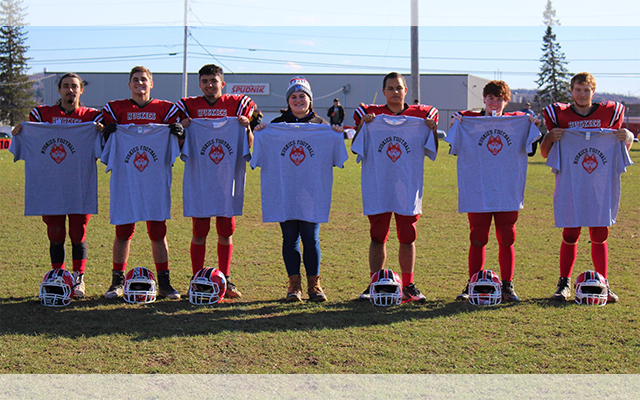 Joseph Cyr • November 8, 2019
On Saturday, Nov. 2, the Aroostook Huskies football team hosted the Valley Mustangs in the final game of the season.

CARIBOU, Maine — On Saturday, Nov. 2, the Aroostook Huskies football team hosted the Valley Mustangs in the final game of the season.

The Huskies made quick work of the Valley Mustangs, pulling off a 40-7 win.

“The game started fast for us as a few key runs by Ilijaha Fortes set us up with good field position,” said coach Taylor DeFelice. “The drive was capped off with a 10 yard touchdown run by Dom Poisson.”

The Huskies next score came in the second quarter on a pass from David Hubacher to Zaylan Johnston and the 2-point conversion was scored by Fortes. The defense held strong on the next Mustang drive, giving the team a short field which allowed Hubacher to connect with Colby Lavoie for a short touchdown pass.

The Huskies lead 20-0 at the halftime break.

“In the second half we started off strong with a 30 yard pass from Poisson to Johnston,” the coach said. “We then had two nice runs by Ilijaha, the second being for a TD.”

Kaden DeMerchant picked off a pass from the Mustangs and took it back to the 15 yard line. On the very next play Hubacher connected on a 15 yard strike to Eric Argraves, a senior who starts on both the offensive and defensive lines, who was able to score his first touchdown in four years of high school football.

After a few defensive stops, Madawaska scored its first touchdown of the game and converted the extra point to make it 34-7. On the Huskies next possession, Poisson scored on a 50-yard run for the final score of the game.

Defensively, the team was paced by DeMerchant, Lavoie, and Argraves.

The Huskies host their first playoff game in six years Saturday as the team hosts Lincoln Academy at 2 p.m. at the Northern Maine Community College. The winner of that game travels to Berlin, New Hampshire on Nov. 16 for the championship.

I was mentioning to our board of directors this past week that I got a quarterly report from a large online retailer who will donate a portion of my purchases to a charity I select.
Campaign Corner END_OF_DOCUMENT_TOKEN_TO_BE_REPLACED