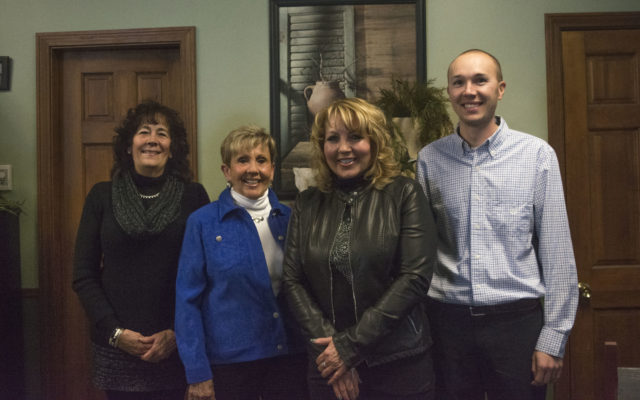 Chris Bouchard • November 30, 2019
Progressive Realty in Caribou recently celebrated 30 years of business during a Nov. 25 open house where current owner Cathy Duffy and her staff said they were confident that the business will keep going strong for years to come.

CARIBOU, Maine — Progressive Realty in Caribou recently celebrated 30 years of business during a Nov. 25 open house where current owner Cathy Duffy and her staff said they were confident that the business will keep going strong for years to come.

Joanne Cyr, who founded the business in 1989 and attended the open house, said the business started as a result of following a dream.

“I was working at the courthouse at the time, and I guess I got tired of working for everybody else, so I decided I’d study real estate,” she said. And then I eventually started my own business.”

When Cyr first opened Progressive Real Estate on Bennett Drive, it was in the same Bennett Drive location but in a smaller building. Roughly three years later, Cyr was able to purchase some property behind the first building and construct the business’ current building.

While Cyr has since retired, she said she is proud of the work Duffy is doing as the current business owner.

“She has done wonders with the business,” Cyr said. “This was my baby, and Cathy has done awesome work since taking over. I’m very thankful, because you hate to see something you built up fall apart. She has done nothing but enhance this business, so I am very proud of her.”

Before taking over, Duffy worked under Cyr for about a dozen years. Her career in real estate all began as a result of a skiing trip, Duffy said.

“I met up with Joanne on the ski trail,” Duffy recalled, “and she said ‘Why don’t you get involved in real estate?’ And I said, ‘You know, I think I could do that’ — because I love to talk, and I think it’s something I’d love.”

From there, Duffy took the necessary classes, obtained her license, and began working for Cyr.

“And we had a blast every day,” Duffy said. “It was a dream job. And I still love it now.”

Duffy started as a sales agent, then worked her way up to associate broker, then to broker, to designated broker, and then took over as owner in 2010.

The business has seen numerous changes over the past three decades, including a staff that has increased to five.

“Computers made a big change,” Cyr said. “When I started I would take video of properties and that, I thought, was a big deal.”

“Times have changed, and we have changed,” Duffy said. “But people are still buying and selling property. We have a lot of repeat business and referrals, and we try to help every customer out, whether they’re big or small.”

“In the next 30 years, they’ll just be bigger and better,” Cyr said.