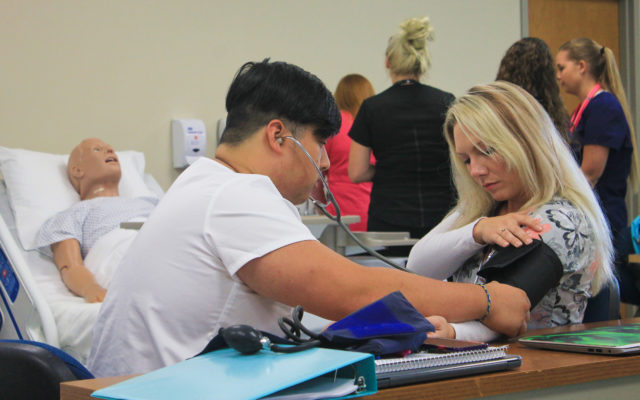 Melissa Lizotte • December 4, 2019
Despite challenges posed by changes in state demographics, the University of Maine at Presque Isle has seen “positive movement forward” in its fall enrollment numbers.

PRESQUE ISLE, Maine — Despite challenges posed by changes in state demographics, the University of Maine at Presque Isle has seen “positive movement forward” in its fall enrollment numbers.

Jason Towers, executive director of enrollment management for UMPI and the University of Maine at Fort Kent, noted that the Presque Isle campus saw a decrease in its number of students from 1,554 in fall 2018 to 1,445 in fall 2019. But he also said that UMPI has experienced a “significant” overall increase in student population of 12.1 percent over the past five years — more than the other campuses in the University of Maine System.

Among the current student population, there are 500 Early College students in high schools across Aroostook County. Students in Early College take dual-enrollment courses that count as both high school and college credit at their local high schools, or take Aspirations courses that are taught by UMPI faculty on campus or online. They have access to all of the support services offered to UMPI students such as tutoring, the writing center and career readiness advising.

The state of Maine allows high school students in Early College to take up to six credit hours per semester — an equivalent of two dual-enrollment courses — without paying tuition. To keep the cost of tuition free for those students, UMPI discounts the tuition by 50 percent and the state covers the remaining costs.

Towers said that UMPI expects the number of those enrolled students to increase due to the program’s popularity.

“Our Early College numbers increased 132 percent between 2015 and 2019,” Towers said. “Getting a feel for college coursework while still in high school can help a lot of students feel more confident in their abilities before they come to college.”

In recent years UMPI has put more intense focus on enrolling and retaining first-year students following their high school graduations. The campus has seen a steady increase in the retention rate for first-year students, referring to those who return to campus for their sophomore year, from 60 percent in fall 2018 to 62 percent in fall 2019. Towers credits the 2017 launch of The Way It Should Be program, which offers free or reduced tuition to eligible Maine students, as a major factor in attracting students who are from Maine.

Despite positive trends, a continuous challenge to student recruitment has been the decrease in the number of high school graduates in Maine due to the state’s aging population. The U.S. Census Bureau reported in 2019 that Aroostook County’s median age grew to 45.3 years old in 2018, higher than the national average of 38.2 years old.

“It’s a challenge whether you’re trying to attract in-state or out-of-state students,” Towers said. “The reality is that colleges are looking at a smaller pool of high school graduates nationwide and are competing for students in that age group.”

But Towers sees potential for UMPI to continue growing its pool of students through the many new programs that the university has established within the past several years, including cybersecurity, agricultural science and agribusiness and a nursing collaboration with UMFK.

UMPI will use major grant funding from the U.S. Department of Education to establish computer science and health administration programs to begin fall 2020.

There are eight students in the newly launched cybersecurity program, which began in fall 2019, five students in agricultural science and agribusiness and five in the nursing program.

UMPI has increased the number of adult learners served online through the YourPace program. The program has a flat tuition rate of $2,800 per semester or $1,400 per session and allows adult learners with past college coursework but no degree to use past educational and work experience as credit. YourPace currently has 130 enrolled students.

Once students are enrolled in college, Towers said, many of them could face challenges that affect their decision to stay, including financial constraints, family obligations and homesickness. As an attempt to increase retention rates, UMPI asks faculty members to submit progress reports for all students during various points in the semester, allowing administrators a chance to identify more quickly if students are at risk of leaving classes.

“This allows us to step in earlier and provide the necessary support systems for students,” Towers said. “We’re going to continue looking for innovative ways to help students get to graduation.”