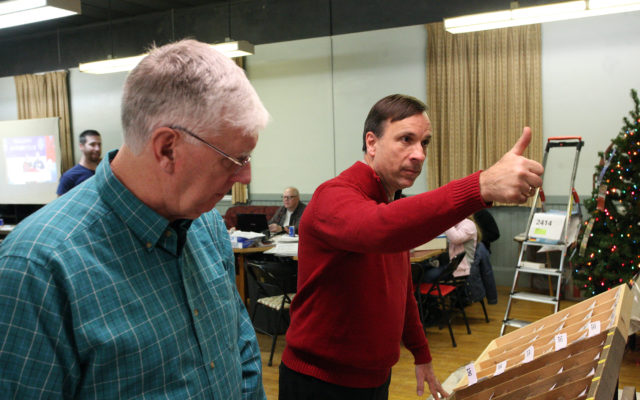 Contributed • December 14, 2019
The Houlton Rotary Club has declared that its 64th annual Radio, TV and  Internet Auction was another big success. The auction this year grossed more than $56,000 which includes money from the bidding, sale of oil tickets, advertising, sponsorships and donations.

HOULTON, Maine — The Houlton Rotary Club has declared that its 64th annual Radio, TV and  Internet Auction was another big success. The auction this year grossed more than $56,000 which includes money from the bidding, sale of oil tickets, advertising, sponsorships and donations.

The bidding alone was nearly $39,000 this year which is just slightly lower than the 2018 auction. There were, however, more than $8,700 in donations made through the auction which is 21 percent above last year’s event. The donations include seven Boy and the Boot pledges for the Houlton Regional Health Services Foundation, direct donations to this year’s Rotary projects and contributions to Cary Library for the purchase of books.

The auction also helps to fund the Houlton Club’s regular charities such as Dollars For Scholars at all area schools, Student Recognition Day, youth baseball and the Rotary Youth Exchange Program.

Rotary President Tracy Rockwell stated, “We are thrilled with the success of the auction and the generosity of the community allowing us to fund such worthwhile projects that will have an impact on individuals locally and worldwide.”

The annual auction is Houlton Rotary’s largest fundraiser each year and requires the work of the entire club and the support of area businesses and individuals. This year’s Auction Chair Katie Hill said, “We can’t thank the community enough for their continued support of this project, from those who donate items, sponsored and advertised to those who bid and purchase the goods. It is a true community event and it wouldn’t be possible without all of this generosity.”

Further information on the auction is available by contacting Rockwell or any Houlton Rotarian. Results of the auction including successful bidders can be found at the club’s website at www.houltonrotary.org.

Just when we thought we were out of the woods with kitten season, it has hit full force.  The past few days have been difficult answering the phone and hearing the stories of why people have litters of kittens they need to surrender.
Campaign Corner END_OF_DOCUMENT_TOKEN_TO_BE_REPLACED