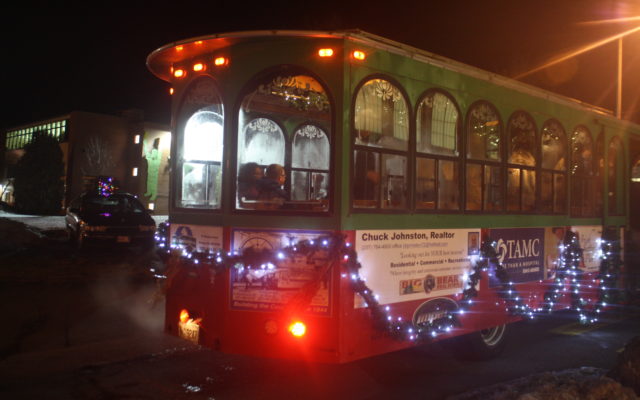 Hundreds get into the Christmas spirit at annual Wintergreen Express

Passengers went aboard a trolley — annually dubbed the “Wintergreen Express” for the event — provided by the Presque Isle Historical Society. Covered in red and green lights and adorned with a long reef, it looked the part.

Craig Green, historical society president, acted as a conductor and host for the trolley ride,  collecting tickets and revving up children with the message that they would soon be reaching the North Pole. Christmas music was played throughout, including the classic carol “Silent Night” and “Feliz Navidad” by Jose Feliciano.

On Sunday night, dozens of passengers loaded onto the trolley. Most were parents with small children of all ages, from infants to those who appeared closer to 7 or 8.

They were welcomed into a colorful room adorned with several reefs, decorated trees, candy canes, wrapped Christmas gifts and a variety of lights. The room was practically full.

Dozens of volunteers dressed as elves of various ages served the families hot cocoa, complete with as many small marshmallows as desired. Families then decorated sugar cookies with multi-colored sprinkles.

The elves, many wearing jingle balls, walked about the room, making sure every table had what they needed. The room quickly became an assortment of ringing jingle bells and Christmas music. 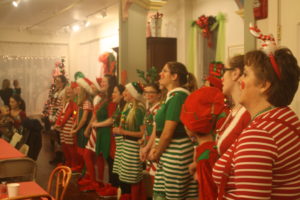 As a final act, the volunteers gathered with Wintergreen Arts Center Board chairman Kim Guerrette Michaud to sing “Frosty the Snowman.” As many elves went deep in their vocal cords to sing the classic song, a few tables sang along.

Alyssa Thompson of Washburn said it was her second time attending the event. Her toddler had enjoyed it last year, so she figured she would introduce a new member of the family to the festivities: her 5-month-old.

“They absolutely love the event,” Thompson said. “I’m sure next year she’ll be looking forward to it as much as this year.”

Michaud said she was happy with how the event had gone over the weekend. She said that previous leadership at Wintergreen had come up with the idea to cater to young children during the holiday season.

“They wanted to have something that was geared toward families with younger children,” Michaud said. “Something that they could do locally without having to travel too far. “

She said that all profits from the Wintergreen Express event would help support the Wintergreen Arts Center’s activities, and that it had consistently been the center’s most successful event fundraiser.

The center, which has been active since 2006, works to encourage appreciation of arts and creativity across The County.

Michaud estimated that about 1,300 people total had attended the Friday-Sunday event.

On Thursday, Rep. Harold “Trey” Stewart III, R-Presque Isle, announced he will run for a state Senate seat in the 2020 legislative election -- an important change for one of the most powerful representatives in the Maine House.
Pets END_OF_DOCUMENT_TOKEN_TO_BE_REPLACED