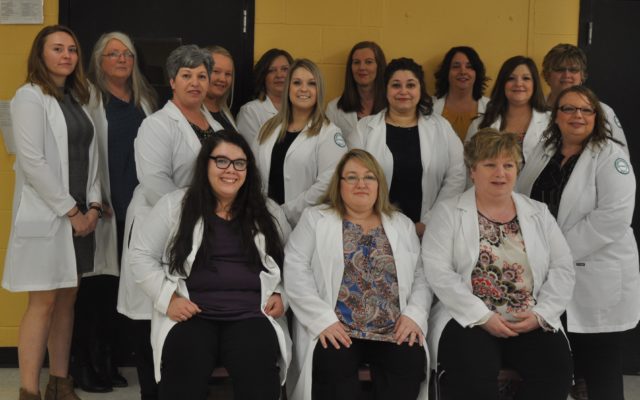 Jen Lynds • December 18, 2019
It was a milestone for both the nurses and Northern Maine Community College, as it marked the graduation of the first class of practical nurses since launching the program earlier this year in response to health care industry needs.

HOULTON, Maine — Smiling broadly in their new white coats, 15 of the newest nurses in Aroostook County were honored at a pinning ceremony on Saturday at the Houlton Community Arts Center.

It was a milestone for both the nurses and Northern Maine Community College, as it marked the graduation of the first class of practical nurses since launching the program earlier this year in response to health care industry needs.

This spring, Northern Maine Community College in Presque Isle launched a program to train practical nurses, or PNs, in Houlton. The 45-week program was based out of Houlton Regional Hospital.

The program is the only one of its kind offered by a public institution in the state, according to officials at Northern Maine Community College. Practical nurses often provide basic nursing and patient care at a more complex level than a nursing assistant, but with fewer responsibilities than a registered nurse. A practical nurse is an important member of a patient’s health care team. They work under the direction of registered nurses and doctors, while providing nursing care.

The possibility of a new program first came to light when Rob Moran, executive director at Community Living Association, also in Houlton, notified the college about a shortage of nurses in southern Aroostook.

The program was co-instructed by Angela Davis, RN/BSN, and Angela Bickford, RN/BSN, and included a host of women who had worked or are currently employed as certified nursing assistants, phlebotomists or in other nursing programs.

Many of the nurses were sponsored by their employers, who paid for some or all of the program in exchange for them to return to to work for a set number of years.

Amy Doughty of Haynesville was thrilled when news of the class was first reported. She has worked as a CNA for 23 years and a medical technician for 10 years, and was excited about the chance to accomplish a goal without having to commit to two years of nursing school.

“I decided to do this because it is something I always wanted to do,” she said. “Ever since I was a little girl, I wanted to be a nurse. I decided now was the time to do it and I am so glad I did.”

Tim Crowley, president of Northern Maine Community College, congratulated the nurses on their success and for filling much-needed positions in a state that is facing a nursing shortage. Dr. Dottie Martin, dean of development and college relations, and Angela Buck, the chair of the nursing and allied health department at the college, also praised the women for their achievement.