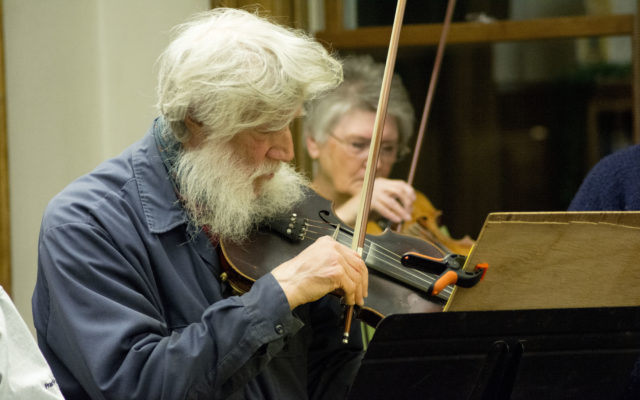 Chris Bouchard • December 22, 2019
The event featured traditional Christmas music from violinist George Allen, who was joined by more than a dozen local musicians.

CARIBOU, Maine — The Caribou Public Library capped off the year with its annual George and Friends Christmas concert on Dec. 19.

The event featured traditional Christmas music from violinist George Allen, who was joined by more than a dozen local musicians.

Caribou Public Library Director Hope Shafer said the concert has been held at least the last couple of years. Shafer joined the facility in 2017.

“As we got close to Thanksgiving, we called up Mr. George Allen asking if he would be coming for Christmas this year. And he said, ‘Yeah, but I think we’re going to have more people’,” she said. 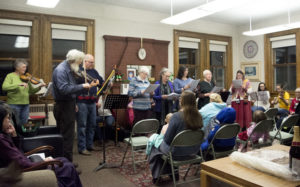 Well over a dozen musicians packed into the Caribou Public Library for the annual George and Friends Christmas concert on Dec. 19. (Chris Bouchard | Aroostook Republican)

Normally, the concert includes roughly six musicians. This year, well more than a dozen joined in on the concert, filling a small reading room in the library and playing to an even larger crowd that brought chairs and stood outside the room.

Guests were asked to join in singing certain songs such as “Silent Night,” and reacted positively to the selection of songs.

Shafer said scheduling the concert is just as simple as giving Allen a call as the event approaches.

Looking ahead, she said she would like to see Allen play at the library “every year, as much as we can.”

“We have some teens and children in the area that may not have been exposed to classical music, and that’s what [this group] specializes in. [The kids] can listen to the music here and maybe think, ‘oh, I really want to do that,’ and then it just goes like wildfire from there,” she said.

Overall, Shafer said this concert is “literally the highlight of our Christmas,” adding that the show is typically scheduled in late December, allowing the library to cap off the year with a show.

“We close out for the year soon, and having George come in is just our way of putting a bow on everything for the year. And the music is just beautiful,” she said.

I was mentioning to our board of directors this past week that I got a quarterly report from a large online retailer who will donate a portion of my purchases to a charity I select.
Campaign Corner END_OF_DOCUMENT_TOKEN_TO_BE_REPLACED