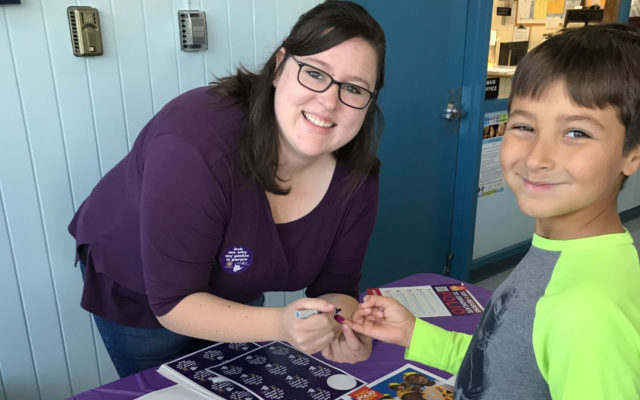 Contributed • January 6, 2020
The University of Maine at Presque Isle and the Presque Isle Rotary Club have declared their eighth annual Purple Pinkie Project, held on World Polio Day, a success.

With the help of the Rotary Clubs in Caribou, Fort Fairfield, Limestone, Mars Hill and Washburn, the celebration spread throughout central Aroostook County. Combined efforts helped to raise nearly $3,000 to go toward Rotary International’s efforts to eradicate polio worldwide.

Purple Pinkie Project activities helped area Rotary Clubs to increase awareness for Rotary International’s worldwide fight to end polio and to raise funding, $1 at a time, to ensure that thousands of children receive their polio immunizations. As happens each year, at each Purple Pinkie station, volunteers encouraged people to donate $1 to have their pinkies marked with purple ink, with money going to the End Polio Now campaign and the resulting purple pinkie symbolizing one child’s life saved from the crippling disease. The estimated cost to immunize one child from polio is $1, and when each child gets immunized, Rotarians mark their pinkies with purple ink to prevent double dosages.

In celebration of World Polio Day on Oct. 24, Rotarians across central Aroostook County wore purple polo “polio” shirts to spread awareness of Rotary’s End Polio Now efforts. Activities kicked off on Oct. 23 with Presque Isle Rotarians visiting Easton Elementary School and Easton Junior-Senior High School. The Caribou Rotary Club also hosted a Purple Pinkie station during its club meeting that day. On Oct. 24, the Project was at a dozen sites in the area, including at UMPI, UMPI’s Houlton Higher Education Center, and the Mark and Emily Turner Memorial Library.

This year’s activities carry on a tradition of raising many local dollars for, and even more awareness about, Rotary International’s efforts to eradicate polio. The first annual World Polio Day and Purple Pinkie Project event, held in October 2012, saw an estimated 1,000 people in the community participate and initially raised $1,250. An anonymous donation of $1,000, however, pushed the fundraising total to well above $2,000. Last year’s event raised nearly $3,000 and saw an even greater number of community members participate. In total since 2012, the efforts have raised more than $22,600.

Since Rotary International began the fight against polio in 1985, the disease has been reduced by more than 99 percent—from more than 350,000 people, mostly children, in 125 countries, to 94 cases by the end of 2019. Attention is focused on three countries—Afghanistan, Nigeria, and Pakistan. By partnering with the World Health Organization and other government and private groups, Rotary International is working harder than ever to end polio: experts say that if the job isn’t finished, the disease could rebound to 10 million cases in the next 40 years.

This year’s event was co-presented by UMPI and the Rotary Clubs of Central Aroostook. For more information, contact UMPI’s Community and Media Relations Office at 768-9452.

Submitted by the Community and Media Relations Office of the University of Maine at Presque Isle.

Maine is more than eight months into Medicaid expansion under the federal Affordable Care Act and trends around who is enrolling and where they live are starting to emerge, bucking some expectations and pointing out access challenges.
Pets END_OF_DOCUMENT_TOKEN_TO_BE_REPLACED

Libby (left) is a 6-month-old spayed and declawed cat with a very loving attitude living at a Halfway Home Pet Rescue foster home.