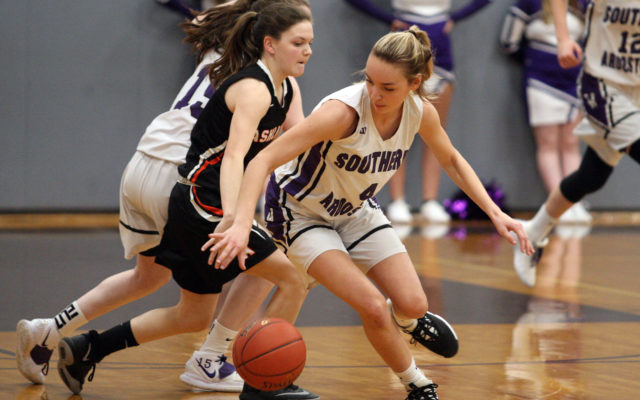 Joseph Cyr • January 8, 2020
The Southern Aroostook girls basketball team continues to dominate the competition as the season nears the midway point. The Warriors have rattled off seven consecutive victories and remain unbeaten this year.

The Southern Aroostook girls basketball team continues to dominate the competition as the season nears the midway point. The Warriors have rattled off seven consecutive victories and remain unbeaten this year.

Despite the perfect record, the Warriors are ranked second in Class D North as of Monday morning, just a few Heal Points behind No. 1 Deer Isle-Stonington (8-1). 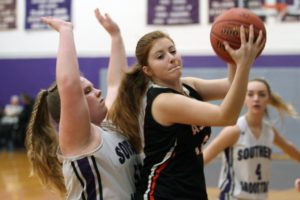 Also in Class D North, the Katahdin girls are not far behind as the Cougars (5-1), are ranked third, while East Grand (0-7) continues to search for its first win on the year.

Hodgdon (6-2) is also enjoying much success on the hardwood this year. The Hawks are ranked ninth in Class C North and could move up considerably in the standings in the next few weeks.

In Class B North, the Shires (6-4) had a busy week, playing four games and coming away with two wins. Houlton is currently ranked fourth in the division.

The following is a recap of games played through Saturday, Jan. 4. 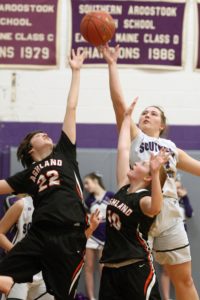 Houlton 59, Old Town 48 — At Houlton Dec. 28, the Shires received a 24-point effort from Mia Henderson in a big win for Houlton. It was just the second loss of the year for Old Town (5-2). Olivia Henderson added eight for the Shires, while Teagan Ewings and Rebecca Howe both had seven, Abbie Worthley six, Drew Warman five, and Kennedy Buzzeo two.

For Old Town, Hannah Richards had 15 and Lexi Thibodeau had 14.

The two squads were tied 12-12 at the end of the first quarter, but Houlton seized a 31-21 halftime lead. The Shires also led 41-37 after three periods.

John Bapst 51, Houlton 42 — At Houlton Dec. 30, Ewings poured in 15 points, while Warman added 13 as the Shires came up short against visiting John Bapst. Abbie Worthley added eight points, while Mia Henderson had four and Emma Swallow had two for the Shires.

Stearns 59, Houlton 54 (OT) — At Houlton Jan. 2, Ewings poured in 19 points but it was not enough for the Shires to get the upset against undefeated Stearns (10-0) in a hard-fought, overtime game. Rebecca Howe chipped in 12 points, while Mia Henderson added 11, O. Henderson had five, Warman three, and Buzzeo and Worthley both had two.

For Stearns, Katherine Alley had 19 and Alisyn Alley added 17. Stearns led 11-10 in the first quarter and 21-18 at the half before Houlton took a 32-31 advantage after three periods and the two squads were knotted up at 45-45 at the end of regulation. Stearns outpaced Houlton 14-9 in the extra period for the victory.

Southern Aroostook 61, Ashland 7 — At Dyer Brook Friday, the host-Warriors rolled to the lopsided win. Makaelyn Porter led the way with 19 points, while Maddie Russell added 14, Madison Shields had nine, Cami Shields and Lexi Rackliff both had four, Emma Nadeau, Emmalee Landry, Selena Botting, Kacy Daggett and Bre Daggett each had two  and Paige Vose had one.

For Ashland, Danni Carter, Mia Carney and McKenna Condon each had two points and Kaitlyn Dotson added one.

For Foxcroft Academy, Kiya Cook had 15 points and Ainsley Ade and Meghan Spooner both had 10.

Madawaska 34, East Grand 17 — At Madawaska Saturday, the Owls were victorious. Individual results were not reported.

For Fort Kent, Desirae Hafford had seven points and Larissa Daigle added six. Hodgdon led 9-2, 19-17 and 34-23 at the quarter breaks.

Katahdin 48, Washburn 22 — At Washburn Saturday, the Cougars picked up the victory. Individual results were not reported.

Maine is more than eight months into Medicaid expansion under the federal Affordable Care Act and trends around who is enrolling and where they live are starting to emerge, bucking some expectations and pointing out access challenges.
Pets END_OF_DOCUMENT_TOKEN_TO_BE_REPLACED