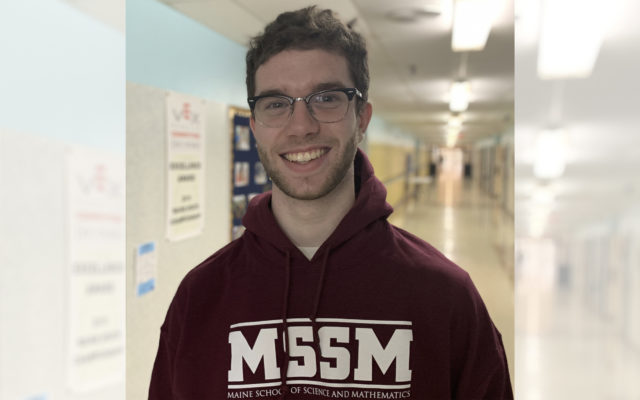 Clothier of Lewiston, a junior at Lewiston High School, and Michael Delorge of Biddeford, a senior at the Maine School of Science and Mathematics in Limestone, were selected from among the state’s top student leaders to be part of the 104-student delegation who will also each receive a $10,000 college scholarship for undergraduate study.

A Biddeford native, he is an Eagle Scout and a participant in the state YMCA Youth in Government program. He holds a great interest in public health policy, and upon graduation plans to major in biomedical engineering with a minor in political science.

The Senate Youth Program was created by Senate Resolution 324 in 1962 and has been sponsored by the Senate and fully funded by The Hearst Foundations since inception. The program’s goal is “to increase young Americans’ understanding of the interrelationships of the three branches of government, learn the caliber and responsibilities of federally elected and appointed officials, and emphasize the vital importance of democratic decision making not only for America but for people around the world.”

Each year this extremely competitive merit-based program brings two students from each state, the District of Columbia and the Department of Defense Education Activity to Washington, D.C., for an intensive weeklong study of the federal government and the people who lead it.

The overall mission of the program is to help instill within each class of student delegates more profound knowledge of the American political process and a lifelong commitment to public service. In addition to the program week, The Hearst Foundations provide each student with a $10,000 undergraduate college scholarship with encouragement to continue coursework in government, history and public affairs. No government funds are utilized.

Delegates and alternates are selected by the state departments of education nationwide and the District of Columbia and Department of Defense Education Activity, after nomination by teachers and principals. The chief state school officer for each jurisdiction confirms the final selection. This year’s Maine delegates and alternates were designated by Pender Makin, Commissioner of Education.

While in Washington the student delegates attend meetings and briefings with senators, members of the House of Representatives, congressional staff, the president, a justice of the Supreme Court, leaders of Cabinet agencies, an ambassador to the United States and senior members of the national media.

Only one member of Maine’s congressional delegation had come out in favor of impeaching President Donald Trump ahead of House Speaker Nancy Pelosi’s Tuesday announcement that the Democratic-led House of Representatives would begin an impeachment inquiry.
Pets END_OF_DOCUMENT_TOKEN_TO_BE_REPLACED