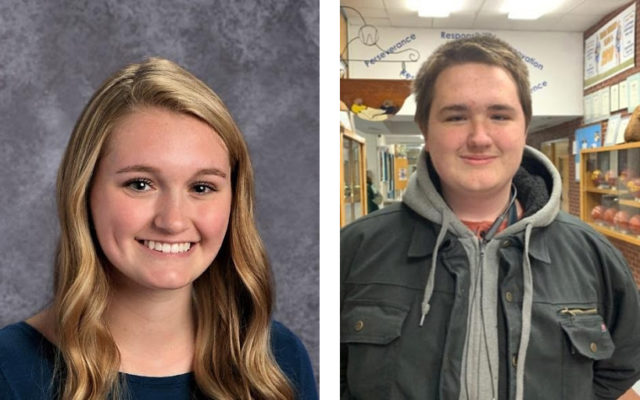 WDHS names Students of the Month

Contributed • January 20, 2020
Principal Larry Worcester and the staff of Washburn District High School recently announced the November and December Students of the Month.

WASHBURN, Maine — Principal Larry Worcester and the staff of Washburn District High School recently announced the November and December Students of the Month.

Willard Brown is the November Student of the month. He is a sophomore at WDHS and the son of Paul Brown.  He recently moved into the district and has quickly shown himself to be a hard worker who is eager to learn.

Ms. Jones stated, “Will has gone above and beyond in criminal research class.  He’s really taking on a leadership role guiding his team.”

Mr. Worcester added, “Will is polite and respectful and brings a positive attitude to school every day.”

Brianna Turner is the December Student of the Month.  She is a junior at WDHS and the daughter of Ward Turner and Christine Turner.

She is described by Mrs. Brown as having “a positive attitude and being a self-motivated student.  These qualities make her a hard worker who strives to do her best and do it well.”

She was recently inducted into the National Honor Society and according to Ms. Jones, “is taking her role as an NHS member seriously.  She wants to be a positive role model to the lower classmen and to prove herself academically.” After school you can find her working at a local hospital as well has job shadowing and volunteering.

On Thursday, Rep. Harold “Trey” Stewart III, R-Presque Isle, announced he will run for a state Senate seat in the 2020 legislative election -- an important change for one of the most powerful representatives in the Maine House.
Pets END_OF_DOCUMENT_TOKEN_TO_BE_REPLACED