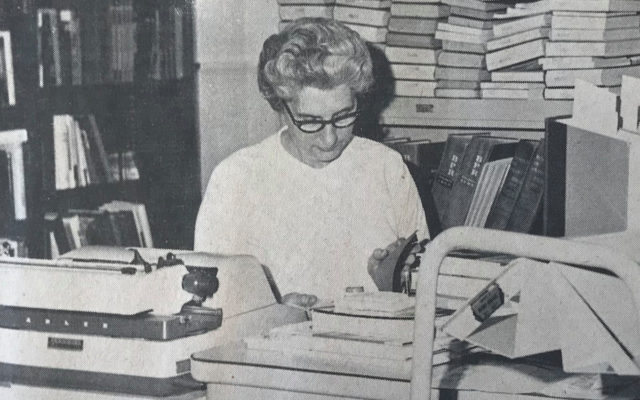 Attending meeting — Andrew J. Saunders and Geo. H. Benn, president of the Houlton Park Association, left Tuesday for Bangor to attend a meeting of Maine Fair interests to make details for the Fairs this coming season.

Rented building— Friedman & Smart Co. have rented the store in the Exchange block formerly occupied by the Shoe Hospital, which they will use for their Automotive Accessory business.

Celebrates anniversary — Mr. and Mrs. Walter Cary quietly observed the 50th anniversary of their wedding at their home on Monday. Many of their friends called on them during the day to extend congratulations. The couple were married in Houlton Jan. 22, 1895, in a ceremony performed at the Snell House by the late Rev. O.K. Crosby of the Unitarian Church. For the past 40 yeard they have resided in their present home.

New owner — Albert C. Daniels Jr., of Houlton announced this week his purchase of the Presque Isle Memorial Works from Oscar H. Taggett of Presque Isle. In making the announcement, Mr. Daniels said that Lee Sommers of Caribou will remain with the business in the capacity of general manager. Mr. Taggett will no longer be associated with the firm.

Celebrates birthday — Albert  Prosser, a resident of the Maple Grove Nursing Home on the Calais road, celebrated his 100th birthday with a cake presented to him by the staff of the home. Mr. Prosser was born in Canada but lived most of his life in Houlton. He was employed by the Bangor and Aroostook Railroad for many years.

Raffle winner — Bob Smith, head of the southern Aroostook chapter of the Maine Employees Association, presented fellow member Paula Scott with a certificate good for 100 gallons of heating oil, donated by Irving Oil. Scott won a raffle for the prize.

Coats for Kids — The Salvation Army is pleased to announce another successful year with the Coats for Kids program; 4,593 were donated, cleaned and distributed to children in northern Maine. In northern Maine, WLBZ, Bangor, Shop ‘n Save Supermarkets and Gold Star Cleaners were the participants. Also, Coca-Cola helped with picking up the coats.

Many of you have been following Luke's story on our Facebook page. Luke came to the Ark last July with his sister Lydia at 8 weeks old. Both Luke and Lydia were in really bad shape with untreated upper respiratory infection.
Campaign Corner END_OF_DOCUMENT_TOKEN_TO_BE_REPLACED