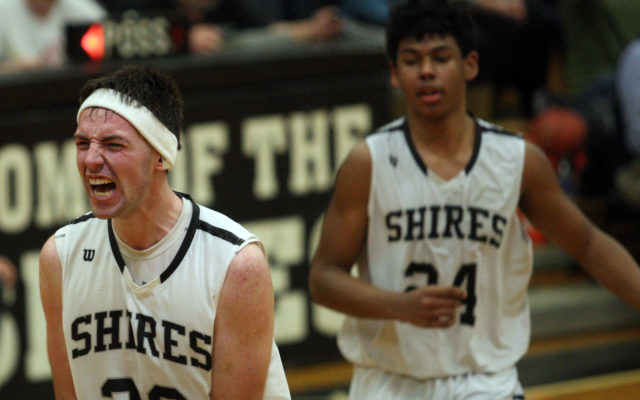 In a game that had a definite postseason vibe — and may well be a precursor to next week’s preliminary playoffs — the Houlton boys outlasted Presque Isle in a back and forth contest that featured 17 lead changes. Many of those lead changes occurred in the final quarter.

“Keegan got a good look there at the end, which is exactly what we wanted to do,” Houlton coach Tim Brewer said. “Our defense at the end of the game wasn’t what we intended to do, but it worked.”

Isaiah Gentle had 14 points for the Shires, while Jaron Gentle added 12 and Drew Foley chipped in four.

Houlton will likely remain as the No. 5 seed for the upcoming postseason, which means the Shires will have to host a preliminary playoff game Wednesday, Feb. 12, against the No. 12 seed to advance to the Cross Insurance Center in Bangor.

As of Wednesday morning, the No. 12 seed was the very same Wildcat squad that gave Houlton all it could handle Tuesday night. Presque Isle (7-10) has one game left on its schedule, hosting the top-ranked Caribou Vikings (16-1) Thursday evening, weather permitting.

Old Town (8-9) is close behind Presque Isle as the No. 13 seed with one game left as well and could potentially leap-frog over the Wildcats to seize the 12th, and final, playoff spot.

“This really was pretty much a playoff game for [Presque Isle],” coach Brewer said. “They can still get in, but will need some help. You have to hand it to Presque Isle. They played extremely well.”

At the Houlton Humane Society, we take adopting the cats and dogs in our charge very seriously.
Campaign Corner END_OF_DOCUMENT_TOKEN_TO_BE_REPLACED