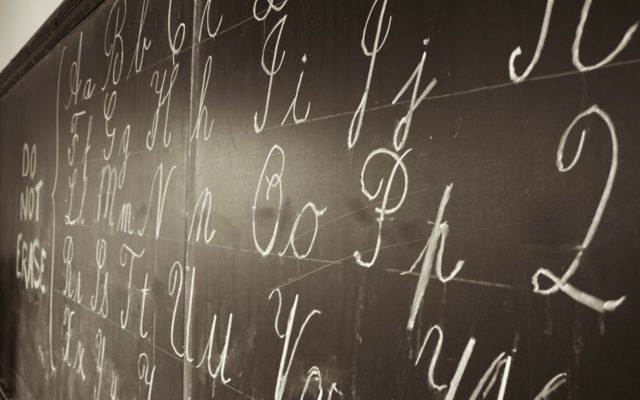 Cursive writing still taught at some County schools, but not like it used to be

Jen Lynds • February 11, 2020
Cursive writing is quickly becoming a thing of the past in schools across the nation.

HOULTON, Maine –Karen Morrison can still recall the many times that she sat beside her great-grandmother when she was a young girl in Houlton, watching as she carefully wrote thank-you notes to her various friends and relatives.

“She had the daintiest handwriting,” the Boston, Massachusetts resident said. “It was almost like the old writing you would see on historical documents.”

As she grew older and learned to print, her grandmother sat her down at her desk and taught her how to make several of her letters in cursive. That same delicate, dignified handwriting that she used in her own writing.

“I can still remember each night taking home a whole page of blank paper for each letter of the alphabet and practicing it in elementary school,” she said. “You spent months and months on cursive writing! I hated making the uppercase e’s and z’s.”

Now, however, cursive writing is quickly becoming a thing of the past in schools across the nation. In Aroostook County, several administrators said that they no longer spend the same amount of time teaching it that they used to, as the trend is toward more students working on computers in the classroom.

In 2010, Common Core standards dropped requirements that the skill be taught in public elementary schools. Since then, approximately two dozen states have reintroduced the practice.

Maine is not one of them. A bill that would have mandated cursive handwriting instruction for Maine public school students in third through fifth grades effectively died in committee last winter. Members of the Education and Cultural Committee voted unanimously against recommending LD 387, sponsored by Rep. Heidi Sampson, R-Alfred, for passage in the Legislature.

Public testimony before the Committee on Education and Cultural Affairs, especially from educators, stressed that a number of districts in the state continue to teach cursive, but lessons are not as long as they were in the past. The difficulty stemmed, they said, from trying to adequately fit lessons on printing, keyboarding and cursive writing in the grades three-five curriculum.

Jane McCall, assistant superintendent of curriculum and instruction at Eastern Aroostook RSU 39 in Caribou, said on Thursday that the district continues to offer some cursive writing instruction.

In Presque Isle, SAD 1 Superintendent Ben Greenlaw said that cursive writing is also introduced in the third grade in the district.

There is more focus on it in the fourth grade, after which it is not taught at all.

“Keyboarding is more the focus after that,” he said.

Misty Goff, a Caribou resident, said that she was a frequent cursive user in the 1980s and 1990s, but ever since has rarely used it.

“I type out all of my notes and texts and things now,” she said. “And I don’t use checks at all anymore, so there is no need for a signature there. Virtually the only time I use cursive is to sign my name on a legal document and then I am usually in a hurry so I just scribble it. I can see why many would argue that it is just simply a waste of a teacher’s time now.”

Next year's Caribou City Council will include a new member and a longtime councilor thanks to Tuesday's election.
Pets END_OF_DOCUMENT_TOKEN_TO_BE_REPLACED

I know many of you have followed DeeDee’s story. DeeDee had leukemia and was under vet care for the past few weeks. Early one recent morning, she lost her battle with leukemia.
What's Happening This Week END_OF_DOCUMENT_TOKEN_TO_BE_REPLACED