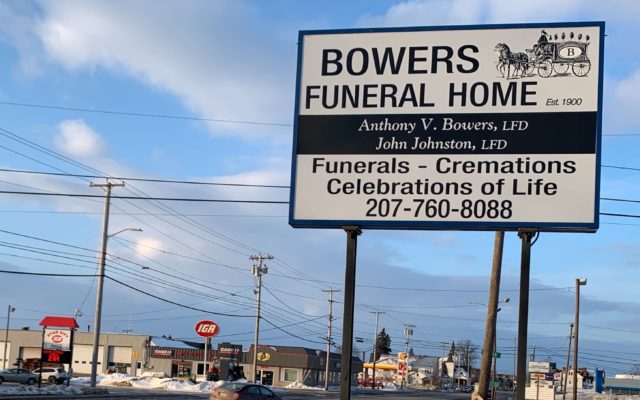 David Marino Jr. • February 24, 2020
A new funeral home is scheduled to open in Presque Isle this week and it is with a name familiar to many in The County.

PRESQUE ISLE, Maine — A new funeral home is scheduled to open in Presque Isle this week and it is with a name familiar to many in The County.

Bowers Funeral Home, which has locations in Houlton and Island Falls, is expanding with a new location in Presque Isle. Owner Tony Bowers said he hopes to have the site at 238 Main Street opened by Feb. 25, with a “grand opening” scheduled for sometime in the future.

Bowers said he chose to expand to Presque Isle after helping to facilitate remembrance services for numerous families in Presque Isle and surrounding communities. Now, he hopes to bring the success he has seen in Houlton to the Star City.

The Bowers Family opened its first funeral home in Sherman in 1900. Bowers’ father expanded the business to Island Falls in 1947 and Patten in 1958.

Tony Bowers directed the expansion to Houlton in 1994. In 1996, he decided to close the Sherman and Patten locations.

For Bowers, who is a fourth-generation funeral director, the most critical part of his line of work was listening carefully to grieving families and paying attention to the details of their requests during a difficult time.

“Helping people — that’s the name of the game — and getting them through their hour, their week, their rest-of-their-life, of grief,” Bowers said.

Next year's Caribou City Council will include a new member and a longtime councilor thanks to Tuesday's election.
Pets END_OF_DOCUMENT_TOKEN_TO_BE_REPLACED

When I wrote the first story of our dog Odie, I didn’t know that I would write a Part 2, but there were so many more stories that I decided more of this little dog’s story needed to be told.
What's Happening This Week END_OF_DOCUMENT_TOKEN_TO_BE_REPLACED