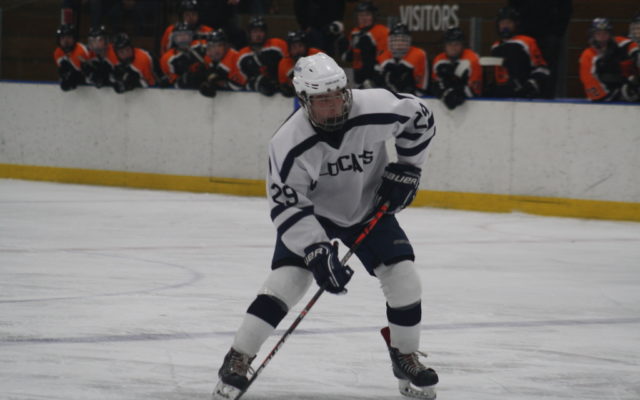 David Marino Jr. • February 29, 2020
WATERVILLE, Maine -- The Presque Isle High School hockey team beat Hampden Academy 4-1 in the Class B North semifinals at Colby College in Waterville on Friday, in what was a remarkable upset by Presque Isle against a division leading team with only one loss on the season.

WATERVILLE, Maine — The Presque Isle High School hockey team beat Hampden Academy 4-1 in the Class B North semifinals at Colby College in Waterville on Friday, in what was a remarkable upset by Presque Isle against a division leading team with only one loss on the season.

Presque Isle will now face either No. 6 Messalonskee High School or No. 2 Old Town/Orono in the Class B North regional final on Wednesday night at the University of Maine’s Alfond Arena in Orono.

The No. 4 Wildcats (now 14-5-1) beat the No. 1 Broncos (14-2-4) in style, scoring three goals within just over two minutes at the beginning of the second period. It was all Presque Isle needed to get the win, as it kept Hampden to only one goal throughout the match.

The offensive flurry was not unsurprising for the Wildcats, a top-ranked offense in Class B. It also was not unprecedented: they scored three goals in four minutes against Gardiner in the third period of the Class B North quarterfinal on Tuesday.

What was surprising was the impressive defensive performance from the Presque Isle defense and junior goalie Brandon Poitras, who only let in one goal the entire night. But it was hardly a busy night for Poitras, as the Wildcats defense continuously kept the Broncos from getting any big offensive chances.

Wildcats coach Carl Flynn described the match as one that was “very even” except for that crucial period in the second half in which Presque Isle scored three goals. He described Poitras as the “game MVP,” especially because of several impressive saves he made in the first period.

Presque Isle sophomore Jonah Roy (who had two goals) and junior Colby Carlisle (one goal and one assist) led their team in points with two each. Hampden sophomore Khaleb Hale, who scored one goal, was the only Bronco to score a point in the game.

Neither team was able to get past each other’s junior goalie in the first period: Cooper Ryan for the Broncos and Brandon Poitras for the Wildcats made some remarkable saves as they kept their opponent scoreless. The game was 0-0 at the end of the first.

The second period began with a bang: only five seconds in, Wildcats senior Connor DeMerchant scored his 21st goal of the year, making the game 1-0. Less than a minute later, Roy scored, making it 2-0. Shortly after, only 2:08 into the third period, Presque Isle’s Carlisle scored a goal of his own. Hampden Academy coach Eric MacDonald quickly called a timeout.

Suddenly, the Wildcats led by three against the number one seed in their division. Though it did not score any more goals, Presque Isle continued to dominate Hampden offensively, outshooting them throughout the period. The score remained 3-0 Presque Isle at the beginning of the third.

Hampden had its first goal three-and-a-half-minutes into the third period, with an unassisted goal from Hale. But it was able to muster little else: it went without scoring for the rest of the period, while Presque Isle’s Roy had his second goal of the night on an empty net. Presque Isle won 4-1.

Halfway Home Pet Rescue in Caribou has partnered with the Houlton Humane Society shelter for a cat spay and neuter clinic on Saturday, May 30, and Sunday, May 31, in Houlton.
Campaign Corner END_OF_DOCUMENT_TOKEN_TO_BE_REPLACED