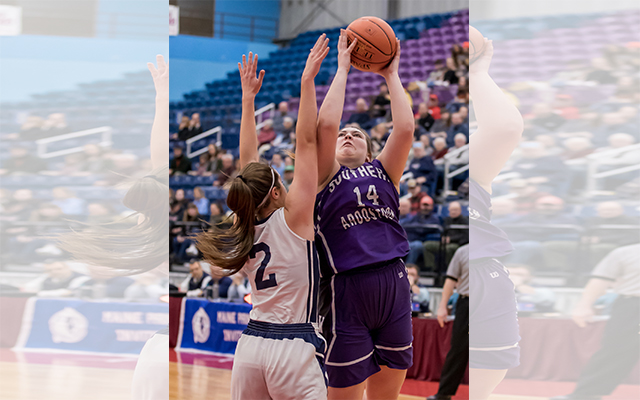 The Warriors fell 42-38 to Greenville at the Augusta Civic Center, giving the Lakers their first state title since 1978.

And she certainly game through. 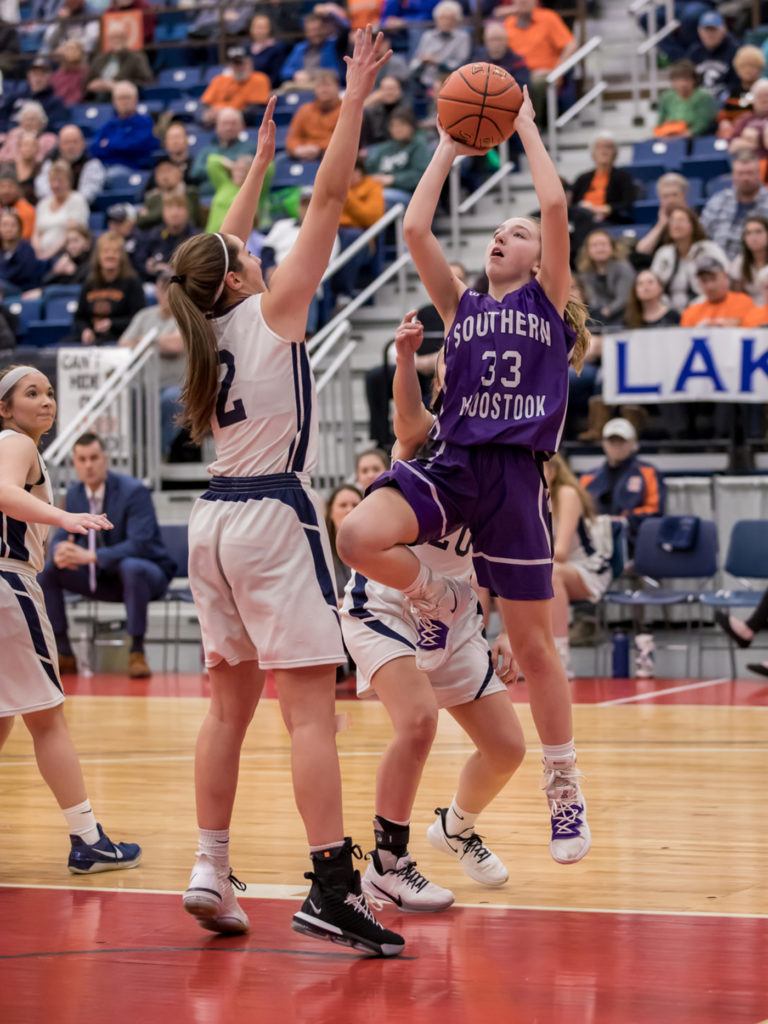 The 5-foot-11 Pelletier poured in a game-high 23 points and grabbed 10 rebounds to lead the Lakers to a 42-38 victory. The Lakers completed a 20-2 campaign, while Southern Aroostook wound up 21-1.

“Everything was working for me,” said Pelletier. “I knew I was going to have to have a really good game if we were going to win. I said ‘I wanted a state championship’ so I’m going to go off.”

Pelletier, who went 9-for 17 from the floor, benefitted from foul trouble incurred by dominant Southern Aroostook center Kacy Daggett, who picked up three fouls in the first half and a fourth foul on a charge in the third period.

“That was very important because she’s a big presence underneath,” Pelletier said. “We took charges and doubled down on her. Everything worked.” 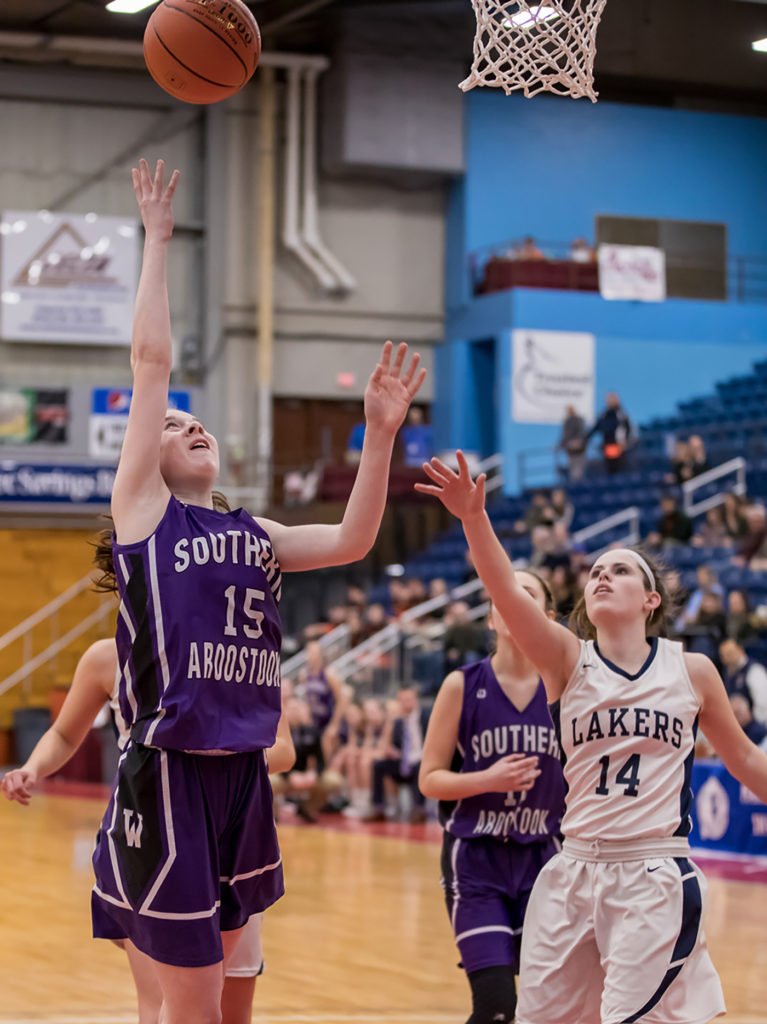 Pelletier said the key to the win was their ability to handle Southern Aroostook’s swarming pressure defense that created tons of turnovers and transition baskets in last year’s final.

“We handled their ball pressure. We were calm with the ball. We knew we had to stop their transition game and we did it,” added Pelletier.

Greenville coach Maren Mason often didn’t have any players in the lane when they were taking free throws and had no more than two players crashing the offensive boards to ensure they had three players back to limit SA’s transition game.

“She can do a [defensive] job on anyone. She’s a tremendous defender,” said Mason. “She gets in the heads of the players [she’s guarding.”

“I can shoot a three but if I’m needed on defense, I’d rather just play defense,” said Noyes, who concentrated on “chasing [Porter] around, keeping my hands up and never looking at the ball, just look at her face the whole game.” 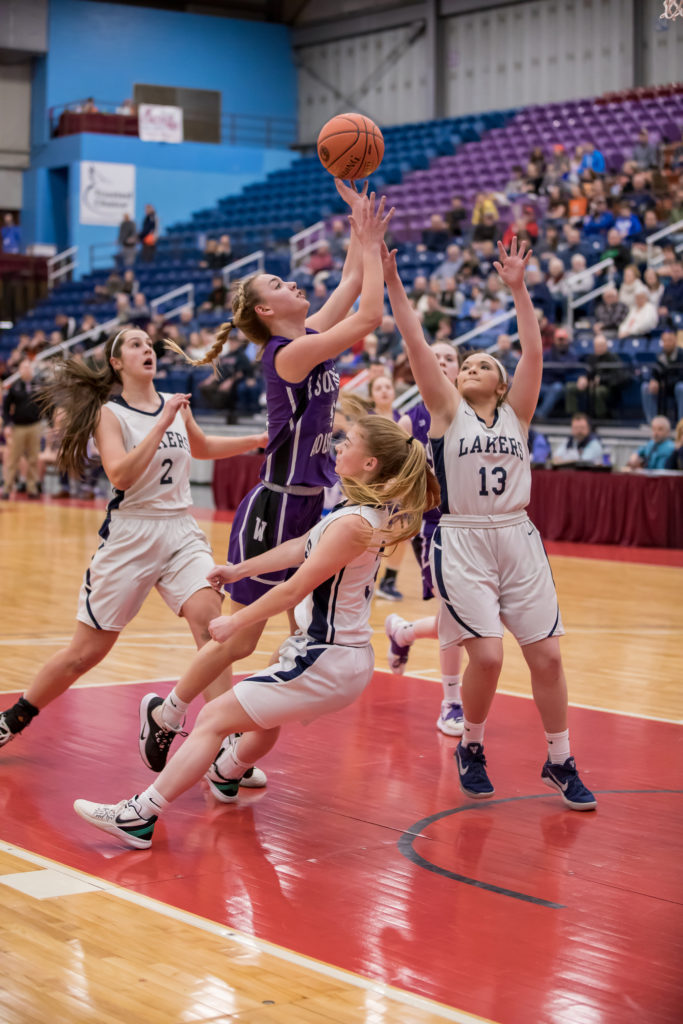 Taking the ball to the hoop is Southern Aroostook’s Emma Nadeau while surrounded by Greenville defenders in Saturday’s State Class D championship at the Augusta Civic Center.
(Courtesy of Jan Vose)

Murray and Breton are also seniors.

Porter, SA’s only senior, had two steals to go with her five points.

Greenville trailed 36-33 with 2:58 left, but outscored the Warriors 9-2 the rest of the way to wrest the title away from Southern Aroostook.

Jessica Pomerleau’s driving layup with 2:30 left started the rally and Breton fed an open Murray underneath for the basket that gave the Lakers the lead for good.

“I was scared I wasn’t going to make it. [Breton] was in the corner, the weak side was wide open, I cut down and [Breton] saw me. I was just lucky,” Murray said.

Daggett banked in a six-footer and was fouled. She missed the foul shot and Pelletier sank a free throw with 15.5 seconds left. 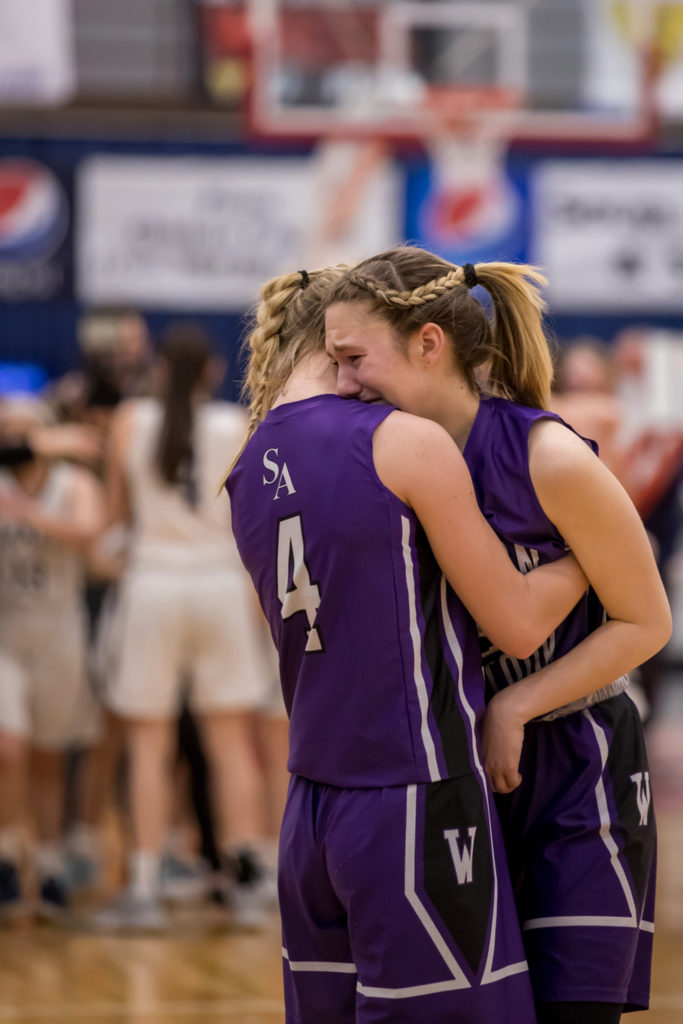 Southern Aroostook’s Makaelyn Porter, right, gets a hug from teammate Emma Nadeau at the conclusion of Saturday’s State Class D championship at the Augusta Civic Center.
(Courtesy of Jan Vose)

But the Warriors, looking for a 3-pointer to tie it, turned the ball over and Noyes added two more foul shots.

“We didn’t hit shots and we got in major foul trouble early which affected how we played [Pelletier] inside,” said Urquhart. “We had to switch to a zone and we hadn’t played one all year. It was a tough adjustment.”

“Greenville played really well,” said Porter. “They executed their game plan. We played well but we couldn’t catch a break. [Shots] that normally fall for us just didn’t. It wasn’t our day.”

Southern Aroostook shot just 2-for-14 from the floor in the fourth quarter.