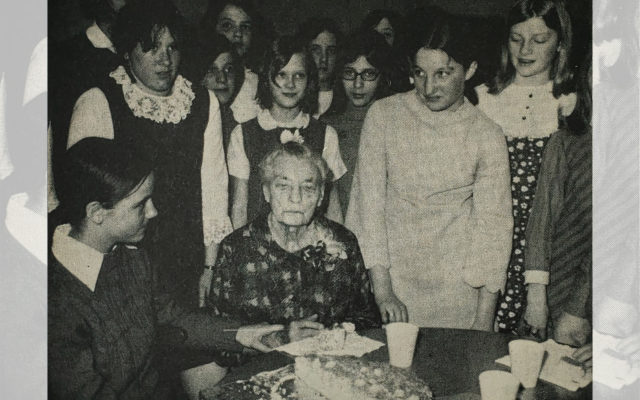 Weaver promoted — Ralph O. Weaver, Jr., son of Mrs. Arline L. Weaver of Presque Isle, was promoted to first lieutenant at Camp Anza, Calif., where he was serving with the Transportation Corps.

He was commissioned a second lieutenant on September 9, 1943. In December, 1943, he was assigned to Camp Anza as Chief of the Processing Branch in the Operations Division.

’Cat skier honored — Andrea Millhouse, a senior at Presque Isle High School, was one of 10 girls in the state to be chosen to compete on the Maine Selection Alpine Ski Team following a tryout at Saddleback Mountain in Rangeley. Millhouse went on to compete in the Eastern High School Alpine Ski Championships at Cannon Mountain, New Hampshire, on March 11 and 12. The competition capped off an extremely successful high school skiing season and career for Millhouse, who was earlier crowned the Aroostook County champion in the giant slalom and went on to place third in the G. S. and fifth in the slalom in the Class A state championships at Sunday River in Bethel in April.

Thanked for fundraising efforts — Brenda Dow was recognized at The Aroostook Medical Center’s annual meeting for serving as the 1994 Annual Fund chairman. Dow and volunteers from the community raised $45,000 toward the purchase of a transesophageal echocardiography imaging transducer (TEE). The TEE is put down the patient’s esophagus for ultrasound imaging of the heart. Outgoing TAMC board chairman Michael MacPherson presented her with a plaque of appreciation.

Halfway Home Pet Rescue in Caribou has partnered with the Houlton Humane Society shelter for a cat spay and neuter clinic on Saturday, May 30, and Sunday, May 31, in Houlton.
Campaign Corner END_OF_DOCUMENT_TOKEN_TO_BE_REPLACED