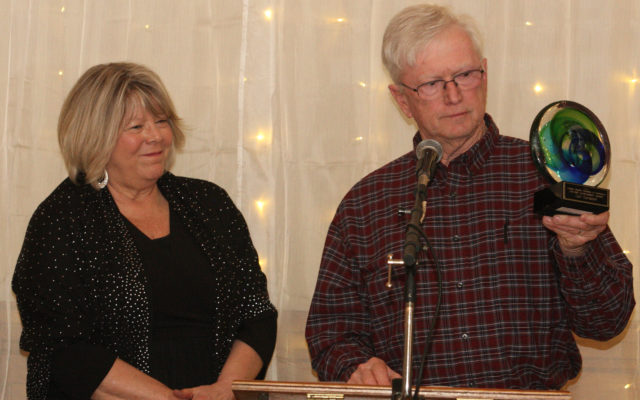 Paula Brewer • March 18, 2020
HOULTON, Maine -- The Roaring ‘20s were brought to life in grand fashion Saturday evening as the 2020 Greater Houlton Chamber of Commerce annual dinner and awards ceremony was held at the Houlton Elks Lodge.

HOULTON, Maine — The Roaring ‘20s were brought to life in grand fashion Saturday evening as the 2020 Greater Houlton Chamber of Commerce annual dinner and awards ceremony was held at the Houlton Elks Lodge.

A smaller than normal crowd turned out for this year’s event, due to concerns about the coronavirus in the nation. That only meant more tasty appetizers and desserts, and a greater opportunity to bid on items in the auction for those who did attend.

“The Chamber annual dinner is one of the most complicated events we do all year with an incredible group of volunteers who help pull everything together and make it a great evening,” said Jane Torres, executive director. “This year we had a cap of 175 diners, but with precautions being ramped up to manage the potential crisis of COVID-19, we had cancellations for about 50. The show did go on though and the remaining group really had a wonderful time and enthusiastically celebrated the six honorees. Next year we are looking forward to holding the dinner in the renovated ballroom on the third floor of the Elks Club.”

Carl Campbell was this year’s recipient of the Lifetime Achievement award. Campbell grew up in Monticello, the first born of Ellie and Gerald Campbell who taught him a work ethic from a young age on and around the farm. He had a passion for the outdoors and hunting and fishing from the time he was a young boy and that has carried over into his adult life. Campbell worked on the farm, drove a trailer truck, worked in the woods, served in the National Guard, guided for both hunting and fishing and had a long career at Eastern Maine Electric where he retired.

“Without a bunch of volunteers to help throughout the years, none of this would have been done,” Campbell said. 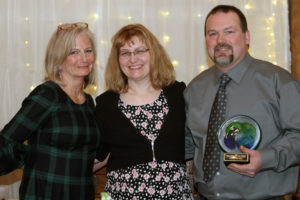 Seiders Hilltop Lanes was the recipient of this year’s Business of the Year award at the 2020 Greater Houlton Chamber of Commerce annual banquet Saturday evening. Accepting the award are Laura and Geno Seiders, along with Jane Torres, executive director of the chamber. (Joseph Cyr)

Laura and Geno Seiders, owners of Seiders’ Hilltop Lanes, were presented with the Business of the Year award. Built by Dick and Gene Stewart and Orville Boutlier in 1964, Hilltop Lanes has been one of the iconic businesses in the Houlton-Hodgdon area for many years.

The Seiders purchased the business in 2018, thanks to a loan from the Northern Maine Development Corp. After putting many hours getting the lanes back to working order and sprucing the space up, they added a mini golf course in the parking lot and began searching for another opportunity to use the building in the upper lot.

The couple opened Seiders Redemption, adjacent to the bowling alley, and have since opened a variety store at the same location.

“We were totally shocked when we saw the letter in the mail,” Laura Seiders said. “We have done so much work there, but there is still much more to do and more to come. We have a lot of plans and will do as much as we can.”

“This is just the beginning,” Geno added. “As we grow, we thank all of you in the community who have supported us. We love seeing everybody’s faces in our business.” 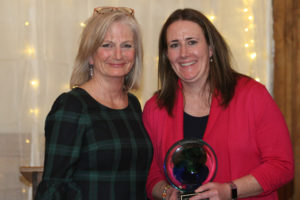 Erica Fitzpatrick Peabody, right, was this year’s recipient of the Young Professional Award at the 2020 Greater Houlton Chamber of Commerce awards banquet. With her is Chamber Executive Director Jane Torres. (Joseph Cyr)

Erica Fitzpatrick Peabody received the Young Professional Award. She grew up on her family’s potato farm and later obtained her degree in horticulture, with a master’s degree in plant pathology.

For 12 years she worked for McCain’s as an agronomist before returning to the family farm to help her dad, Albert Fitzpatrick, where she introduced newer technology to the family business. She also serves on the RSU 29 school board.

“There are probably others who are more deserving of this recognition,” Peabody said. 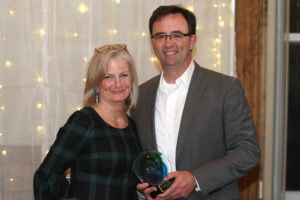 Fred Grant, right, owner of WHOU in Houlton, was presented with the Above and Beyond Award Saturday evening at the 2020 Greater Houlton Chamber of Commerce annual awards banquet. Making the presentation is Chamber Executive Director Jane Torres. (Joseph Cyr)

Fred Grant was presented with the Above and Beyond Award, created three years ago to be given to an individual or business who went that extra mile to do something wonderful in the Greater Houlton area.

Graduating from Houlton High in 1988, Grant went on to obtain a bachelor’s degree in music from the University of Hartford and master’s degree from Adelphi University. He worked for 12 years in Higher Education at Adelphi and at Babson College as the director of campus life.

In 2005 he moved back to Houlton with his wife Renee and three children, Connor, Ben and Ellie, to run his internet business, CollegeHelpers.com. He purchased WHOU radio station in 2011 and it is through his work at the radio station that he sealed his fate as a fierce supporter of the community.

“I had the opportunity to live away from home for a number of years, and I came home,” he said. “I never thought I would be back, but it’s times like these where our communities are challenged. I have to look back and think, ‘Wow, I was really fortunate to make the decision to move back home.’” 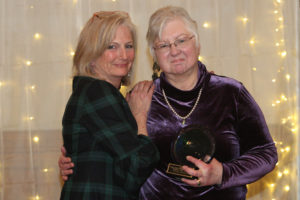 Priscilla Monroe was the recipient of the Community Spirit Award. A native of Massachusetts, Monroe “retired” to Maine and quickly settled into the Houlton community. She serves on the town’s planning and zoning boards, as well as the town’s downtown committee and attends every town council meeting.

“She embodies what it means to have community spirit by embracing her new home with all its joys and problems,” said Torres. “Priscilla could sit back and watch and just enjoy her family of four grandchildren and two great-grandchildren, but instead has become the unofficial cheerleader and a supreme advocate of Houlton.”

Monroe said she was “overwhelmed” when she opened the letter notifying her of the award and thanked the community for welcoming her and her family. 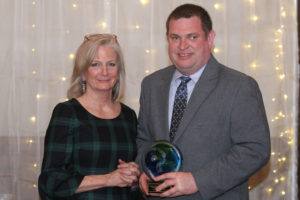 The Southern Aroostook Development Corporation received the Community Service Award. Josh McLaughlin accepted the award on behalf of his father, Jon, who was unable to attend.

“I know my dad is very humbled and appreciative of this award,” McLaughlin said. “I have had the privilege to be a board member and past president. It’s not a one-person show. It’s countless people that truly believe in this community.”

For the first time since 2019, there is competition for open seats on the Houlton Town Council
Pets END_OF_DOCUMENT_TOKEN_TO_BE_REPLACED