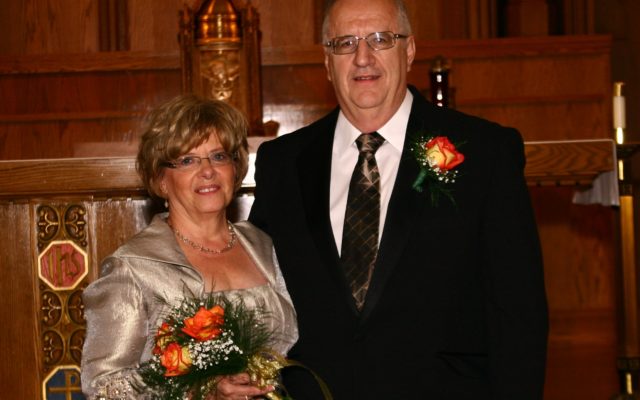 Contributed • March 25, 2020
The couple that plays together also brings much happiness to others, in the case of Warren and Joan Harvey.

Editor’s Note: Since the coronavirus is particularly dangerous to our older population, we have suspended giving you fresh County Faces for the time being and hope you will enjoy some from our archives.

The couple that plays together also brings much happiness to others, in the case of Warren and Joan Harvey. The musicians met when they began performing together more than four decades ago, but only married in 2010. Nowadays, they are famous in the St. John Valley for providing entertainment free of charge to folks at multiple assisted-living centers.

They first became friends in the 1970s when Joan’s band, The Dynamics, was seeking a new guitar player.

“I was just out of the service looking for a place to play and in the paper, the St. John Valley Times, I saw an ad for a guitar player,” Warren said. “I played keyboards back then but figured I got nothing to lose, so I borrowed a guitar. I tried out and guess I did okay.”

“We tried him and we kept him,” Joan said.

Warren and Joan both grew up on potato farms in St. Francis and Frenchville respectively. Each has had a lifelong love of music.

“My mother was a violin player. She also played piano and harmonica. She was a very good musician so I grew up in a musical family,” Joan said. “My father used to dance jigs. We used to put a big piece of plywood on the floor and my father and brothers would all line up and dance jigs.”

“In my case, as far as music goes, I started with a couple friends next door to me. We just started jamming. I bought my first organ when I was 11 years old and we played school dances back then,” Warren said.

Warren is a Vietnam veteran who spent some time in college before being drafted into the United States Army.

After the war he worked for a local wholesale grocer, then opened Radio Shack stores in Fort Kent and Madawaska, which he owned for 31 years.

Joan worked as a telephone operator in Fort Kent, and later went back to college at the University of Maine at Fort Kent, where she earned an associate’s degree in business.  She was a hospital receptionist at Northern Maine Medical Center for 22 years.

Considering why the couple happily donate their time playing music for the residents, Joan summed it up: “We’re also gonna be there someday, and we’d love to have music too.”

“You can’t beat the pay. It’s the gratification of those people enjoying it,” Warren added. “It’s funny because people that have Alzheimer’s, you sing these old songs and they can sing them right with you. They know the words by heart.”

Alzheimer’s disease is something which has played a significant role in Warren’s life.

“My first wife passed away of Alzheimer’s at 58 years old,” he said.

“That disease is not very nice,” Joan added.

Warren and Joan have six adult children between them, many of whom are also musicians.

The couple has a long history of community service.

Warren has been the Grand Knight for the Fort Kent Knights of Columbus for several years, while Joan is a Columbiette and a member of the Ladies of St. Anne. They teach a popular line dancing class at the Fort Kent Senior College and also perform at the annual University of Maine at Fort Kent Sucrerie. They are instrumental to the annual Fiddlers Jamboree at UMFK, for which Warren serves as emcee and organizer, and Joan accompanies other musicians on piano.

Although they shared decades of friendship before becoming a couple, the Harveys say it was a common passion which ultimately ignited their love for one another.

“I guess the music brought us together,” Joan said.

Many of you have been following Luke's story on our Facebook page. Luke came to the Ark last July with his sister Lydia at 8 weeks old. Both Luke and Lydia were in really bad shape with untreated upper respiratory infection.
Campaign Corner END_OF_DOCUMENT_TOKEN_TO_BE_REPLACED