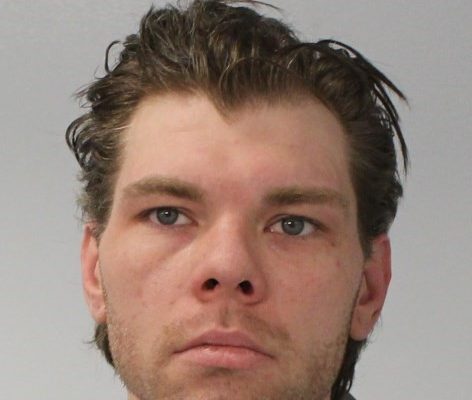 David Marino Jr. • April 16, 2020
Police are searching for a man suspected of burglarizing the Braden Theater in Presque Isle on Sunday morning.

PRESQUE ISLE, Maine — Police are searching for a man suspected of burglarizing the Braden Theater in Presque Isle on Sunday morning.

At about 10 a.m. on Sunday, April 12, the owners of the Braden Theater called Presque Isle Police after finding the aftermath of what they suspected to be a recent break-in to the building.

Around 9 a.m on Sunday, 36-year-old Stephen Desmond, of the Presque Isle-area, allegedly entered the theater through its rear door and proceeded to take several electronic items, as well as candy, energy drinks and an unknown amount of Canadian dollars, police said.

The electronics and cash taken totaled approximately $2,400, according to authorities.

Using search history from a computer the suspect had used within the theater, police were able to determine where to look on a nearby surveillance camera.

Presque Isle Police Officer Tyler Seeley said police were able to quickly identify Desmond from security tape because he had had prior run-ins with law enforcement. Seeley said that officers had last interacted with Desmond within the last few weeks.

Police said they will charge Desmond with two counts of burglary, both Class B felonies, two counts of theft, Class C felonies and one count of criminal mischief, a Class D misdemeanor.

Presque Isle Police are unsure about a motive for the crime, with Seeley saying that he did not know of any connection Desmond had to the theater.

Police have been unable to find Desmond, and a warrant has been issued for his arrest. Because of his previous living history, police do not believe he has left the Presque Isle area.

The Braden Theater has been closed since March 16. The theater did not respond to a request for comment.

Presque Isle Police are asking anyone with knowledge about Desmond’s location to contact authorities.