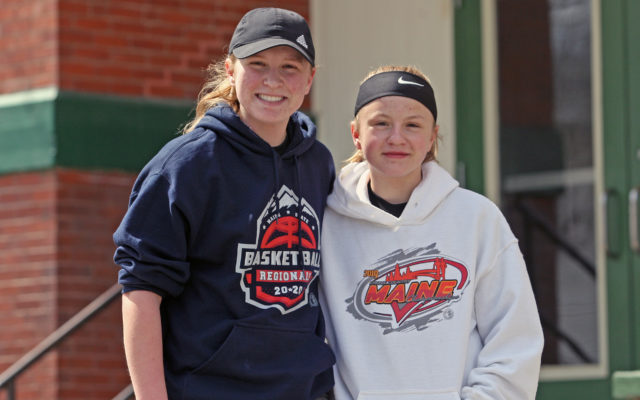 Joseph Cyr • April 20, 2020
Siblings Teagan and Teanne Ewings of Houlton are no strangers to running.

HOULTON, Maine — Siblings Teagan and Teanne Ewings of Houlton are no strangers to running.

The daughters of Joe Ewings and Angie Ewings can normally be spotted jogging along one of the Shiretown’s many side streets getting in their daily workouts. They are also among the top finishers at most every local road race held throughout the summer.

Over the years, the two siblings have logged countless miles. Now, they can say they have also completed a marathon of sorts.

On Wednesday, the two girls completed a 26.2-mile run/walk as a way to both test their physical fitness and foster hope for residents of the Shiretown.

“We got the idea from the Internet,” Teagan said. “We had seen some people do it in 12 hours and were curious to see if we could beat that time. We’re always up for a challenge. Another big reason we wanted to do this was to have a positive impact on the community. With everything going on, it’s easy to be negative about everything, but we wanted to show others that throughout this we can be positive and have some good come out of this.”

Teagan, 17, is a senior at Greater Houlton Christian Academy while her younger sister Teanne, 12, is a seventh-grader at the school.

The two started their run from their home on Smyrna Street and ran a predetermined course that saw the two travel into town, to their school and up North Street before looping back to their home. The loop included strolls past their friends’ houses.

While stopping at their school, the two girls changed their socks as a way to keep blisters from forming on their feet.

“The walk itself was exactly as I expected,” Teagan said. “It was long and slightly painful, but the most unexpected part was the soreness after. Our legs had gotten used to the walking movement for 6-plus hours and the minute we stopped, our legs really started to cramp up. And we could especially feel it the next morning.”

“Both have been running at a very young age,” Angie Ewings said. “Teagan ran four years of cross country in high school and four years in middle school. She also ran three years of high school track and field.”

Teanne joined the middle school cross country team in the fourth grade, her mom said, and has participated in it every year since. This past year, Teanne won all of her middle school meets  and captured the All-Aroostook League Individual Title at the County meet in Woodland.

“Teanne has won several races as the overall female and a few as the overall runner this past running season,” her mom said. “She actually won the Aroostook Musterds running series this year as the “Overall Female,” but due to schedule conflicts and this virus it has not been awarded to her. She would be the youngest runner by far to ever earn this title in history of the Musterds  running series.”

Teagan said while she was disappointed her senior track season was canceled, she knew she needed to stay in shape for the fall when she will attend Husson University and run both track and cross country.

“There was definitely a sense of accomplishment after we finished,” Teagan said. “I was very proud of us for finishing and not giving up. Teanne has never ran nor walked over 5 miles and I have never done more than 10 miles. So it was definitely a big accomplishment for both of us. We can both now say we’ve done a marathon, together. “

A few years back the Ark was gifted with something that we never dreamed possible. It is a gift that left us speechless and opened a whole new door for us.
Campaign Corner END_OF_DOCUMENT_TOKEN_TO_BE_REPLACED