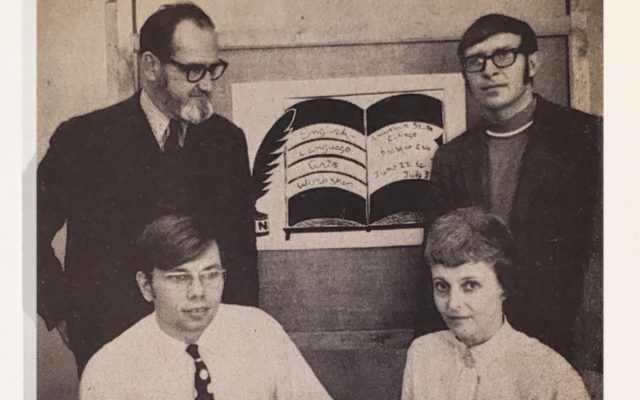 Yvonne Tardie • April 22, 2020
75 Years Ago -  April 26, 1945 Promotion -- Donald E. Thibodeau, stationed at a dispensary with the Medical Department of the U.S. Navy at Panama, was promoted to Petty Officer 3/c according to word received by Mrs. Thibodeau of Roberts Street.

Promotion — Donald E. Thibodeau, stationed at a dispensary with the Medical Department of the U.S. Navy at Panama, was promoted to Petty Officer 3/c according to word received by Mrs. Thibodeau of Roberts Street. Petty Officer Thibodeau was privileged to work along with men in the medical unit.

Sorority pledges — Three University of Maine students from Presque Isle and vicinity were among 27 pledged to membership by the five campus sororities in a Pledging Ceremony April 18. Those from this area were Miss Patricia Berry of Presque Isle, a sophomore, to Delta Lelta; Miss Virginia Racliffe of Easton, a freshman, to Phi Mu; and Miss Margaret O. Smith, of Mars Hill, a freshman to Pi Beta Phi.

Loyalty day — Dana Connors, Presque Isle city manager, signed a proclamation declaring May 1 as VFW Loyalty Day in Presque Isle. Loyalty Day, proclaimed a national holiday in 1958, is intended to serve as a reminder to all U.S. citizens of our heritage and our opportunity to live and work in a free country.

First hospital pledge — Over 50 community people were at The Aroostook Medical Center for the kick-off of the 1995 TAMC Annual Fund campaign. Paul Kinney, chairman of the Annual Fund campaign, accepted the first pledge of $5,000 from Bob Reed of FA Peabody. Reed said, “FA Peabody is proud to contribute to The Aroostook Medical Center’s 1995 Annual Fund Drive which provided state of the art equipment for serving the needs of our friends and neighbors in Aroostook County.” The goal of $45,000 would help purchase a portable bedside monitor for children with heart and breathing problems, a Life-Pak 9P for the critically ill patients and a high tech portable x-ray machine.

It was a freezing day across The County, but you could hardly tell from the turnout. Even after a massive surge in absentee ballot requests across the Central Aroostook area, droves of people came out to vote in Presque Isle, Mapleton, Washburn and Fort Fairfield.
Pets END_OF_DOCUMENT_TOKEN_TO_BE_REPLACED