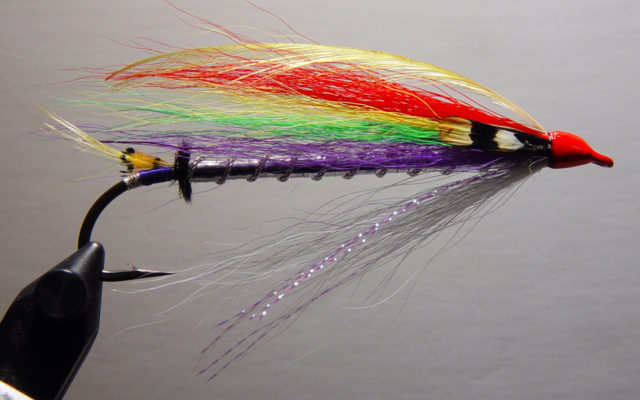 Strange streamers are worth a try or a buy

Bill Graves, Special to The County • April 29, 2020
Some of the largest trout and salmon of the entire season are hooked on beautiful streamlined bait fish imitations and vividly hued attractor patterns.

Aroostook anglers anticipate ice out for several winter months and the chance to troll tandem streamers on local lakes or cast single streamers on regional streams.

Some of the largest trout and salmon of the entire season are hooked on these beautiful streamlined bait fish imitations and vividly hued attractor patterns. Some streamers have feather wings, others are tied with bucktail or hair and a few boast a combination of both as well as strands of synthetic, flashy fibers.

Oddly, if a fisherman were asked to name a dozen streamer flies, most would have a problem. Most of us have three or four favorite patterns and seldom stray from these revered options. 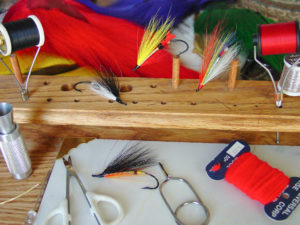 If you tie your own flies, It’s possible to build some patterns not readily available in local stores. (Bill Graves)

Do you know what a favorite fly pattern is? It’s a fly that catches a lot of fish some outings and a few fish every time. In most cases there’s a simple reason for this success that’s often overlooked: that particular pattern is the one you use the most. A fly in the water most of the time will catch way more than a fly in the fly box.

It’s important to experiment with streamer flies. What works one day may not draw a single strike the next trip. My dear ol’ Dad had a very perceptive adage: “There are flies tied to catch fish, and even more tied to catch fishermen.” My theory is to drag a variety of colors and styles until one produces consistent action, then tie on more of that one. I use a two-fly dropper rig so I can actually have four flies swimming from two rods, a feathered smorgasbord to begin the day.

It’s likely most fly boxes boast a gray ghost, red and white bucktail, Mickey Finn, Nine-Three, black nose dace, Magog smelt and a supervisor. These are all local favorites, and while still effective, I’ve always believed that trout and salmon are smarter than we realize, and the older, larger fish become wary of some regularly used flies. For this very reason I have a second backup box of streamers that are less recognized by anglers and fish alike, and often surprisingly effective.

Some of the “strange streamers” may be difficult to locate in sporting goods stores, but many are available. If you tie your own flies or know someone who does, all these patterns are built from basic materials and well worth the effort to tie and try. Some are smelt or bait fish imitations, and others are vividly bright and resemble no living creature in any Maine lake. 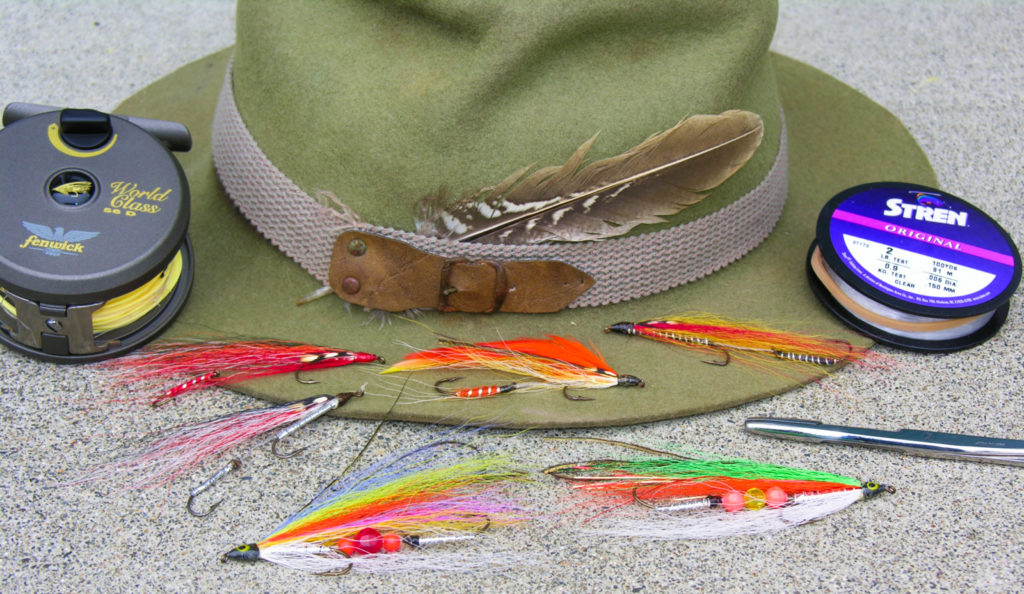 Colorful streamer fly patterns are very effective for spring trolling, and it’s good to have a few along that the fish don’t see regularly. (Bill Graves)

One theory is that fish strike these colorful flies out of aggression rather than any desire to eat. I call these attractor flies because they can be seen from long distances in the water, and even if a fish comes to look but doesn’t take that fly, it might strike one of the other patterns being trolled nearby.

The Ouananiche Sunset is just such a streamer with yellow, purple and orange in the wings and a shiny body. I’ve had great luck with this feather wing fly. A little brook trout and a Miss Sharon are two bucktail winged attractor patterns that also draw consistent action when water levels are high and dingy.

A red gray ghost, pink gray ghost and rainbow ghost comprise a trio of colorful feather winged streamers based on the venerable old Carrie Stevens creation. Less tied and used, these three flies are too often overlooked, yet every angler should have one of them for spring trolling. The blue devil is a lesser known Carrie Stevens creation, with orange and blue feather wings as well as peacock hurl and jungle cock, sleek and enticing. Another Stevens creation, greyhound, is a bait fish mimic seldom remembered or used. With gray feather wings, red and white bucktail belly with silver tinsel this unique streamer takes fish. Add a morning glory, Colonel Bates, golden darter, Herb Johnson special, rooster’s regret and a yellow witch to your fly box inventory.

For ice-out trolling a level trolling line or sinking tip fly line helps get flies down 3  to 6 feet without using sinkers. A long 12- to 15-foot leader on a floating fly line will keep a tandem streamer at least a foot below the surface. Remember, trolling flies requires a faster boat speed than cut bait, live bait and lures.

Tried and true fly patterns still produce action, but oftentimes it’s something new and unique that really stirs things up. It won’t be long until we can float a boat and hold a fly rod. Whether you tie some or buy some, it’s time to add a few strange streamers to your collection.

For all it does to refresh us, burn energy and keep us sharp, we all need playtime, dogs and cats included. Sharing playtime with pets has the added benefit of strengthening the bond between us, so we better understand one another.
Campaign Corner END_OF_DOCUMENT_TOKEN_TO_BE_REPLACED