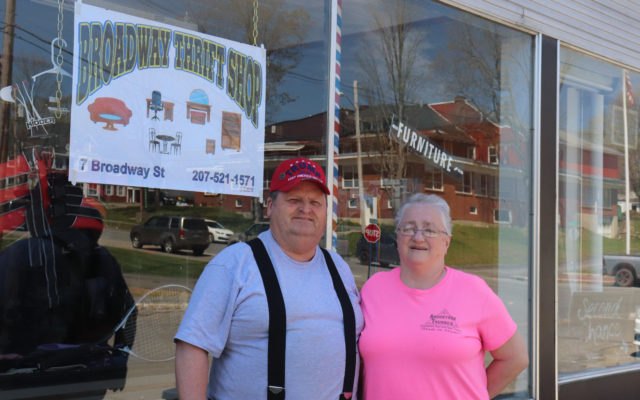 Alexander MacDougall • May 21, 2020
A new thrift store has opened along Broadway in Houlton, selling a wide variety of products such as old movies, books and action figures, alongside things like furniture and kitchen appliances.

HOULTON, Maine — A new thrift store has opened along Broadway in Houlton, selling a wide variety of products such as old movies, books and action figures, alongside things like furniture and kitchen appliances.

Rex McLaughlin is the owner of the Broadway Thrift Shop alongside his wife Charlene. It’s the third business McLaughlin has operated in the area since moving back to his native Houlton from Portland, where he lived for 30 years.

“This is kind of my retirement fund,” McLaughlin said of his store. “I’m doing it just for something to do.”

Many of the items in McLaughlin’s store are received via donations, though he also buys some of the products himself, particularly the used furniture, which he says is more in demand.

“It’s been going pretty good for the last week, so we’ve been doing very well,” he said. “Hopefully we can get into the huge furniture because a lot of people are looking for that.”

For furniture, the store presently carries items like tables, drawers and cabinets, the prices of which are generally marked less than $100. McLaughlin also says childrens clothing has sold well.

But above all, McLaughlin says he is just glad to be back in Houlton, the town in which he was raised in.

“I’m just looking forward to doing good business here in my hometown,” he says. “I love being back up north.”

The store is located at 7 Broadway in Houlton, and is open from 9 a.m. to 4 p.m, Monday through Friday.

A few years back the Ark was gifted with something that we never dreamed possible. It is a gift that left us speechless and opened a whole new door for us.
Campaign Corner END_OF_DOCUMENT_TOKEN_TO_BE_REPLACED