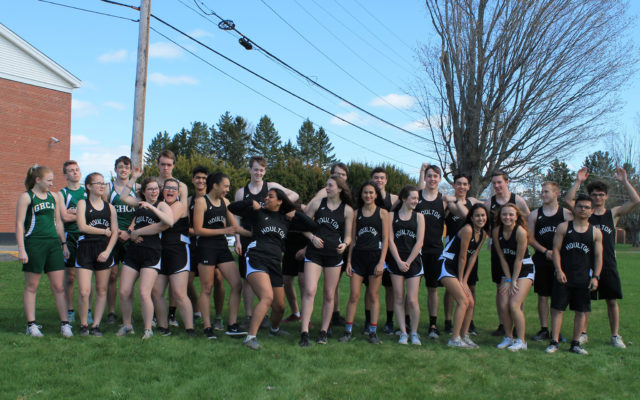 HOULTON, Maine — Houlton Rotary Club’s online meetings are becoming more commonplace. The club conducted its seventh online meeting on May 18, since the onslaught of COVID-19.

Rotary’s guest speaker Monday was Chris Rines. Rines is a 2010 graduate of UMPI and currently lives in Houlton with his wife and daughter. He has been coaching cross country and track and field for Houlton since 2013, and Ultimate Disc (Frisbee) since 2012.

He has also organized and has been part of many community events including the LP Miracle Mile, Moosestompers Snow Run, and Houlton Ultimate Summer League. He is a Certified Athletic Trainer and currently works at Region Two School.

Rines began his presentation with a brief history of Houlton’s cross country program. In 1929, Clyde Stinson, who had graduated from UMaine that year and accepted a chemistry and physics teaching position at Houlton High School, convinced then-principal, Milton Lambert, to create a cross country program.

Between 1929 and 1932, Stinson’s team took several state championship titles, and the team won the National Interscholastic Cross Country Championship in New Jersey on Thanksgiving morning, 1932. The team did have a small track built for them within the larger horse track in Community Park. Stinson coached cross country at HHS until the 1960’s when he retired, and his son Joel took over the program.

Bob Askren began coaching cross country in the 1990’s and the program discontinued upon his retirement. A handful of individuals had some involvement in encouraging students to run or take part in field events, however, there was not a formal program in place after Askren retired.

In 2013, Rines began coaching at Houlton High School, and cross country and track and field clubs were created for students to officially start competing in MPA sanctioned events again. Rines invited students from surrounding schools to participate as well, and several schools took part in the program including GHCA, Hodgdon, and Katahdin. The program has averaged about 33 students per year since 2013.

Several of Rines’ students took Aroostook County League Championships the first year including Rylee Warman and Elyjah Crockett in 2013, and Tim Glatter won a state championship in javelin in 2016.

The RSU 29 school board voted to officially promote track and field back into the varsity program of athletics in 2019. The Houlton High School Cross Country and Track and Field varsity program currently uses parking lots, streets, gyms, and hallways for practices.

Rines put in a request for a high jump mat, as he has had several students participate in the high jump event at meets, including Isabelle Cosby and Austin Brown, who won regionals in this event. Houlton Rotary Club granted the request and donated a new high jump mat in 2019.

Rines reports that having this mat is extremely helpful in the appropriate training for the students participating in this event. Rines and his guests discussed their need for additional training facilities that would allow them to achieve their potential as a program. Their current needs are running lanes, throwing pits, a long jump sand pit, and a pole vault. Rines stated that running lanes, either a straight away, or a full circle, are the most needed training facilities.

Rines’ guest speakers each had input regarding their experiences in the cross country and track and field programs. Emmalyne Drake, who is currently an 11th grader at Houlton Middle-High School, sung praises for her coaches and for the training program, however, stated concerns for safety when running on streets and ATV trails, as well as sprinting in parking lots.

Eli Bulley is currently a senior at HHS, and is planning to attend UMFK next year and to participate in the running program at the university. Bulley also had very positive statements about the coaches and training of the current program, and noted how it has helped him physically as well as mentally, particularly in setting goals and maintaining a schedule. He stated similar concerns regarding safety and inconvenience while running in parking lots with vehicles and uneven terrain.

Mia Hanning graduated from HHS in 2018, and has just completed her second year at Husson. Hanning participated in the track and field program at Husson and stated the university has a full circular track and other state of the art facilities which have helped she and other students compete at the collegiate level, and achieve greater heights athletically.

Hanning, as well as Drake and Bulley, believe that the current Houlton High School cross country and track and field programs need appropriate facilities in order to prepare the students to compete on the same level as other high schools, and to prepare them to compete at the collegiate level.

For all it does to refresh us, burn energy and keep us sharp, we all need playtime, dogs and cats included. Sharing playtime with pets has the added benefit of strengthening the bond between us, so we better understand one another.
Campaign Corner END_OF_DOCUMENT_TOKEN_TO_BE_REPLACED