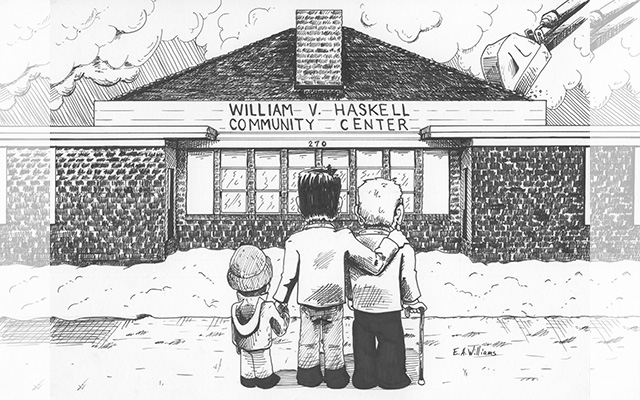 An in-person opening reception will be held from 6 to 8 p.m. on June 5, during Presque Isle’s First Friday Downtown Art Walk.  The most current CDC guidelines for social gatherings will be followed.

Dyer is most well known for his comical cartoons of Aroostook County life featured in the region’s weekly newspapers.

“I started out just copying cartoon characters and borrowing how-to-draw books by Lee J. Ames from the school library,” said Dyer.  “I have always and still do adore Norman Rockwell’s artwork.  My favorite being ‘Sunset.’”

Dyer’s earliest pieces were caricatures until three years ago when he started creating editorial cartoons for local weekly newspapers under the pseudonym, E.A. Williams, coined after his three children, Elizabeth, Amelia, and William.

“I got interested in caricatures and political cartoons in junior high,” said Dyer.  “My first commissioned work was in my freshman year when I drew caricatures of the junior high girls’ soccer team.  I like to say that I have gotten better since.”

In 2018, Dyer won first place from the Maine Press Association as editorial cartoonist E.A. Williams for The Star-Herald, and won third place in 2019.

Dyer’s favorite medium is graphite and colored pencil, but over the last two years he has also been creating digital art.

Dyer grew up in West Chapman and currently lives in Presque Isle with his wife of 20 years, Melissa, and their three children.  His “day job” is with the USDA as a biological science technician in a potato breeding program.

“I love being in Aroostook County just for the people,” said Dyer.  “There are not many places you can say ‘Hi’ to a complete stranger and actually start a conversation.”

During his opening reception on June 5, Dyer will have original pencil drawings of his editorial cartoons and prints of his favorite digital cartoons on display and for sale.

Just when we thought we were out of the woods with kitten season, it has hit full force.  The past few days have been difficult answering the phone and hearing the stories of why people have litters of kittens they need to surrender.
Campaign Corner END_OF_DOCUMENT_TOKEN_TO_BE_REPLACED