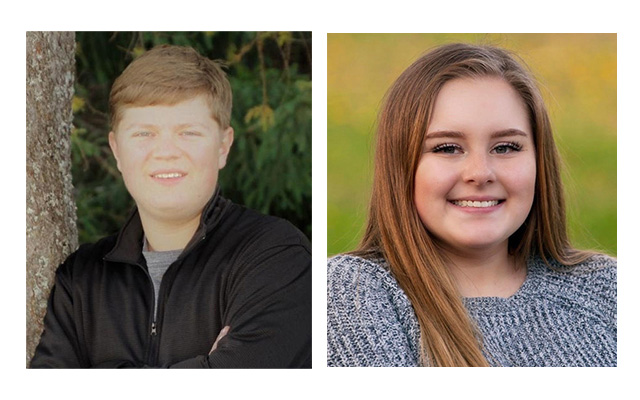 Contributed • May 27, 2020
Ashland District School officials have announced the honor parts for the Class of 2020. Graham Ezra Julian Berry has earned the distinction of valedictorian and Haleigh Hope Holmes the distinction of salutatorian.

ASHLAND, Maine — Ashland District School officials have announced the honor parts for the Class of 2020. Graham Ezra Julian Berry has earned the distinction of valedictorian and Haleigh Hope Holmes the distinction of salutatorian.

Berry is the son of Julie and “Butch” Berry and has served as the president of Maine Future Farmers of America from 2018-20. He was an All Aroostook percussionist in grades seven through 12, treasurer of both his class and the National Honor Society, captain of the golf team, and was named an Across-the-Board Student in grades nine through 11.

He will pursue business management studies at the University of Maine, Orono, in September. His long-range goal is to become involved in the management end of the golf industry.

Holmes is the daughter of Kim and Preston Holmes of Portage. She has served as president of the Ashland Chapter of Future Farmers of America, the National Honor Society, and of her classes as well as vice president of Student Council.

She has also been named to the All-Aroostook Band and Chorus.

Holmes will attend the University of Maine at Presque Isle and major in psychology.

Just when we thought we were out of the woods with kitten season, it has hit full force.  The past few days have been difficult answering the phone and hearing the stories of why people have litters of kittens they need to surrender.
Campaign Corner END_OF_DOCUMENT_TOKEN_TO_BE_REPLACED