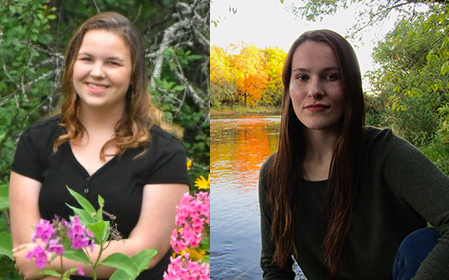 Contributed • May 28, 2020
Katahdin Middle-High School Principal and Superintendent Marie Robinson has announced the honor parts for the Class of 2020.

STACYVILLE, Maine — Katahdin Middle-High School Principal and Superintendent Marie Robinson has announced the honor parts for the Class of 2020.

Shelby Lewis has been named valedictorian, while Lorin Clendenin was selected as salutatorian. In addition, 12 students were also announced as honor students.

Lewis is the daughter of Andrew and Elizabeth Lewis. She plans to attend the University of Maine for business management and journalism. Lewis has been very involved at KMHS, according to Robinson. She was a member of the student council for all four years, including vice president her junior year and president during her senior year.

Aside from activities, Lewis has been in All-Aroostook Chorus for four years. She has received the Phi-Beta-Kappa award as well as the prestigious Maine Principal’s award. Over the years Lewis has given much of her time toward volunteer work for her school, church and community. Lewis attended HOBY Maine and HOBY WLC where she gained so many of the leadership skills she will take forward with her as she embarks on her journey beyond high school.

Clendenin is the daughter of Carol Jones. After high school, she plans on working in the culinary field after earning very high marks in the Region II Culinary Arts Program. Clendenin has been involved in school activities playing soccer her freshman year, drama her freshman year, as well as class vice president her sophomore year.

Also, in her sophomore year she earned the Principal’s Award in the art show. In addition to these activities, Clendenin has done volunteer work in Patten with Casco Bay School as well as participated in two blood drives.

Foss is the daughter of Raymond and Ruth Foss. She is going to the University of Maine at Presque Isle to major in elementary education. A member of the student council, Foss earned All Aroostook her freshman and junior years. She has done volunteer work at her school and has put in hours at Heaven’s Blessings Food Cupboard for her community.

Gardner is the daughter of Leslie and Jody Gardner. She plans to attend Eastern Maine Community College for digital graphic design. Gardner played soccer, basketball, and softball. She was the class secretary from freshman to junior year and class president her senior year. Gardner participated in student council for all four years and is a member of the National Honor Society and National Technical Honor Society since her junior year. She received the Maine Soccer Coaches All Star Award and volunteered to teach clarinet lessons for KES students, helped the youth soccer team and volunteered for Special Olympics.

Giles, the son of Steve and Sheila Giles, will attend NMCC to study electrical constructions and maintenance. Giles played soccer and basketball for five years, and baseball for three years. Giles was captain for his junior and senior years of soccer and basketball. In addition, he was the junior class president and inducted into NHS his sophomore year. Each year Caleb volunteers for many events taking place in the community such as the Memorial Day Barbeque and the Lumbermen’s Museum Bean Dinner held during Patten Pioneer Days.

Hamm, the son of Jeff and Wendy Hamm, will attend EMCC to study computer science. He was one of the only students from KHS who participated in a program at Region III in Lincoln. Hamm had a very successful experience in the information technology program, which helped guide him to his career path. Garrett is also a top athlete at the school playing soccer for all of his years through high school and playing basketball for two years.

Howes, the son of Holly Glidden and Mike Howes, plans to attend the University of Maine at Presque Isle to pursue a career in physical education. Howes played soccer and basketball for five years and during that time, he was a captain for both sports for two years. Howes also played baseball three years. Additionally, Howes served as the class vice president during his freshman and junior years. During his time at Katahdin, he earned the All-Aroostook award for soccer his junior and senior years and received the All-Aroostook All-Star award for basketball his senior year and played in the Aroostook League Senior Basketball All-Star game. He is also a member of the National Honor Society and the National Technical Honor Society.

Humphrey, the daughter of Durward and Claudette Humphrey, will attend Husson University in the pre-law program. She was praised by KES teachers that she interned for in the Pre-K and kindergarten programs. Humphrey joined the student council her junior year and served as vice president for the student council this year. She has also been a member of NHS since her junior year. During her senior year she was the secretary for the senior class. Humphrey received honor roll awards every year. She has also received two academic excellence awards.

Jacobs, the daughter of Bryon Jacobs and Rachel Townsend, will attend the University of New England in the fall and has been accepted into the pre-med program. Jacobs transferred to KMHS from Southern Aroostook Community School her senior year. She has been a band historian, played soccer, joined the prom committee, participated in drama, and was the student council secretary while at SACS. Jacobs also received the award for academic excellence from this school as well. Breyauna completed the CNA program in addition to the phlebotomist and medical terminology course while at Region II for the past two years.

Kaelin, the grandson of Sue Anderson and son of Scott Kaelin, will attend Unity College in the fall. Kaelin joined the soccer team his senior year. Over the years at KMHS, he received numerous awards in music and in English, as well as an athletic award for soccer. Kaelin is an environmental enthusiast and is very proud of the work he did for Bike Maine for the past few years as well as the Casco Bay Project.

Manzo, the son of  Jaylene  and Brenden Landry will attend the Maine Maritime Academy to major in marine biology. He participated in Bike Maine for three years. Manzo played soccer during his freshman year and made the honor roll every year, earning high honors twice during his senior year. Manzo also received an academic excellence award for forensics.

McKenney, the son of James McKenney and Reinelle Robinson, will start work as a campground ranger for Baxter State Park at Trout Brook Farm after high school. He has been a member of the baseball team as well as class president his freshman year. McKenney has been a big part of the Outdoor Education program at KHS which includes several years of volunteer work for Bike Maine.

O’Hara, the daughter of Wesley and Gretchen O’Hara, has been accepted to the University of Alaska, Fairbanks, the University of Maine, and Husson University. At this time, Savannah is planning on taking some time off after graduation to work and to explore various career paths. She has been a huge part of the success of the school newspaper for the last two years as creative writing is one of her strengths. O’Hara has been an integral member of the Art Club, winning numerous awards for her artwork over the years. She enjoyed her internship that she did her senior year with the art teacher for the Pre-K program. This internship left her considering art education as a possible major, but graphic design is also a possibility.

Pelkey, the daughter of Kenny and Beth Pelkey, credits her entire family which includes her parents, grandparents, brothers, and sisters for shaping her into the person she is today. Pelkey would like to do something in the field of cosmetology and she would also like to take some time to travel. She has been a strong student council member for three years and particularly has never missed helping out with the Haunted Trail. Pelekey has been a part of the All-Aroostook chorus for grades six through 10. Pelkey has been on the honor roll many times during her high school years. She looks forward to exploring some career paths after high school.

I was mentioning to our board of directors this past week that I got a quarterly report from a large online retailer who will donate a portion of my purchases to a charity I select.
Campaign Corner END_OF_DOCUMENT_TOKEN_TO_BE_REPLACED